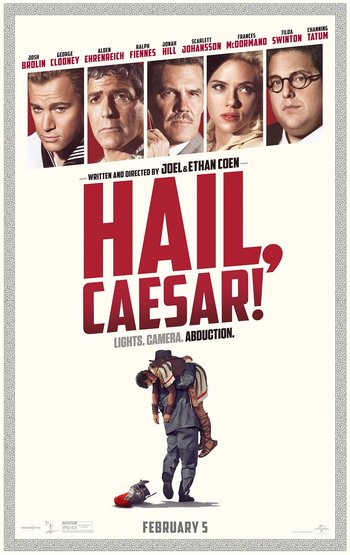 "Here at Capitol Pictures, as you know, millions of people look to us for inspiration and uplift and, yes, entertainment. And we're going to give it to 'em."
— Edward "Eddie" Mannix
Advertisement:

Hail, Caesar! is a 2016 film from The Coen Brothers and Universal Pictures.

Eddie Mannix (Josh Brolin) is a fixer for the Hollywood studio Capitol Pictures in the 1950s who's getting tired of juggling the eclectic personalities that his business attracts. He's considering taking an offer to work for an aviation company, but before he can accept or deny the offer, Mannix still has to do his job for at least one more day. So, within twenty-seven hours, Mannix must deal with a teen heartthrob's conflict with his Shakespearian director, an A-List actress's out-of-wedlock pregnancy, and a Communist plot to kidnap the star of Hail, Caesar! A Tale of the Christ, all while fending off gossip columnists and quitting smoking.