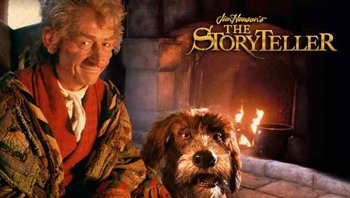 "When people told themselves their past with stories,
explained their present with stories,
and foretold their future with stories,
the best place by the fire was kept for... the Storyteller."
— Opening Narration
Advertisement:

The first set of nine episodes featured John Hurt as the Storyteller and Brian Henson voicing the Dog. Set in a vaguely 16th Century European world, the tales told were rather obscure by American standards not always having the standard "happy ending" modern audiences are accustomed to, and much more mature and darker then what most kids read. The duo were always sitting comfortably by the fire, while the Dog would function as a Greek Chorus asking questions and making snarky comments. 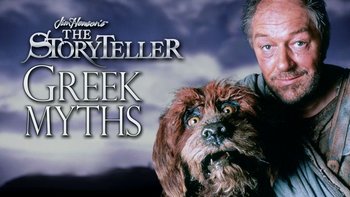 A follow-up, The StoryTeller: Greek Myths, featured a different Storyteller played by Michael Gambon but with the same Dog, and more well-known tales. Set in Ancient Greece, roughly a thousand years after Theseus killed the Minotaur, this Storyteller is a more dubious character having come to the Isle of Crete to rob the dead or as he puts it "exchange their coins for smaller valuables". He and the Dog ended being chased into the Labyrinth by the angry locals. Now trapped the two wander for an exit, and the Storyteller is reminded of the ancient myths by the artifacts he finds scattered across the Labyrinth, such as Orpheus's lyre and a bust of Daedalus. This incarnation was a Mini Series that was four episodes long and unlike the first series had a definite beginning and end.

Since the end of the show further stories have been released in comic form. A graphic novel with nine stories

In 2019, it was announced that Neil Gaiman would write a revival of the series

. Incorporating more serialized elements in the framing story, the new series will explore more of the Storyteller's origins and place him in a northern kingdom where stories have become forbidden.

In the U.S., NBC didn't run the whole first series initially, so The Jim Henson Hour used the unaired stories as the second half of several episodes. Greek Myths didn't air in the U.S. at all until HBO picked both series up at the end of The '90s!