Where da White Women At? 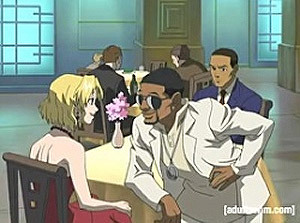 Even Usher likes the white meat.note The guy in the blue suit is actually her husband
Little Boy: [serving coffee] Cream?
Little Girl: No thank you, I take it black. Like my men.
— Airplane!
Advertisement:

Just like European men and east Asian women can't get enough of each other, and Gentile guys and Jewish chicks go gaga over one another (or Jewish guys and Gentile chicks), so do black men and white women. According to media, anyway.

Though it's no big deal in most of the world (not more than other types of interracial relationships, anyway), there are still some parts — e.g. South Africa, parts of Europe and the USA (especially the south) — where black-white ethnic relations are troubled and this trope actually comes into play. In Real Life, black man/white woman couples are pretty common and there are a variety of views on what this kind of relationship should or does entail. White man/black woman pairs don't get as much attention (positive or negative) perhaps because they are less common, at least in America, though the gap appears to be narrowing. South Africa and the USA have had a serious Double Standard when it comes to this gender divide, as a direct consequence of Apartheid and the USA's Jim Crow laws (and slavery before that): many white men had black slave mistresses, and this practice was generally accepted or at least tolerated. The reverse-gendered version, of a free woman loving a male slave, was seen as “corrupting” the white race and could result in death for the (African) slave and the public shaming (and possible rape/death) of the free woman. As a result the laws of the time deemed a black man and white woman engaging in consensual sex (or even sharing space) as equal to rape and lead to the deaths of many innocent black men and the humiliation of innocent white women. When slavery gave way to Jim Crow and Apartheid, this bias remained - the chief difference being that before Apartheid and Jim Crow era, a white woman-black man couple would be lynched by the authorities whereas during, they would instead be lynched by family/friends/neighbors whom the authorities couldn't be bothered to prosecute for murder. That’s assuming the man in question wasn’t already jailed for, god forbid, being attracted to her.

While less common and no longer illegal, hatred for these pairings is still Truth in Television. Due to the extensive history between blacks and whites described above, bias still exists toward black man & white women pairings. And people today have lost their lives or dignity over choosing someone who isn’t of their race. But given that any real life example would be subjective and might even cause a flame war, all you need to know about this trope's impact in real life has been described above.

Please note that just like this trope's white/Asian counterpart, not every black/white romance falls under this trope. If the lovers just happen to be interracial and nobody makes a big deal out of it, then it is simply a mundane relationship. Only when it is seen as a controversial mixed marriage and/or one of the lovers expresses an extra attraction to their partner's skin tone is the trope in effect.

It's also worth noting that the affection isn't one-sided in the least. There are plenty of white women on the prowl, wondering if what they've heard is true. This trope was commonly nicknamed Jungle Fever, until Spike Lee made a film deconstructing the term.