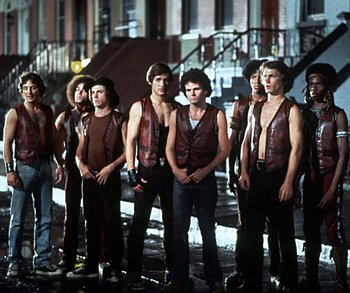 The Warriors are an equal opportunity gang. And so are most of the gangs they tangle with.
Herc: White boys, I love em, I fucking love em. Dumb as a box of rocks. [Lists a bunch of ways that the white dealers made mistakes or made it easy for the cops to bust them.] And then when you make the deal, there's no runner, no nothing, just the guy himself walking up to you in the parking lot shouting "I brought the drugs, did you bring the money?" If white boys wanna sell drugs in Baltimore, they have to make different laws for it, like even it out for them.
Kima Greggs: Affirmative action?
Herc: Leave no white man behind!
— The Wire
Advertisement:

In reaction to the mainstream stereotype (justified or not is beside the point) that most members of "street gangs" are black or non-white Latino, TV shows aimed at children sometimes go to great lengths to depict gangs as consisting mostly of other ethnic groups, or at least as an evil Five-Token Band. They may or may not be Pretty Fly for a White Guy or White Hair, Black Heart.

This trope is to be expected in areas that are mostly white to begin with. It is important to point out that in some places and/or time periods this very much can be accurate. The cores of American cities, where such organized crime tends to take place, are only majority black and latino because of a phenomenon known as "white flight". This was a social phenomenon that occurred unevenly and didn't effect every European ethnic group: notably, it often excluded non-Christians. Many Suburban neighborhood covenants did not merely target black people but also practically everyone who wasn't of British descent and Protestant. This left significant white minorities in many cities. All young men inhabiting the neglected core of a city are highly likely to turn to organized crime, regardless of race. While in some places the gangs are almost always segregated by race, in other places they aren't at all: this kind of depends on what the relationships look like between the particular European ethnic group and the black residents. Compare Equal-Opportunity Evil. This trope is different to some degree because breaking the law is not in itself morally wrong, and gangs are not necessarily any more brutal than the police or indeed the businessmen they might prey on (i.e. they are not necessarily "evil" in comparison to any other character in the work). The gang might be cruder, perhaps more violent and up-front in their brutality, but might not actually be worse. Sometimes the gang might actually be the more principled party: if a Friendly Neighborhood Gangster is matched up with a Killer Cop, or a Magnificent Bastard of a corporate executive (in which case the gangsters might be the closest thing in the work to a "good guy").