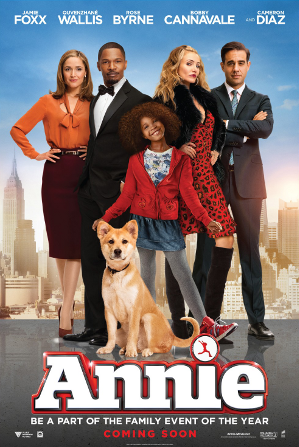 Based on the 1977 musical of the same name, which in turn is based on the comic strip Little Orphan Annie, Annie is a 2014 musical film starring Quvenzhané Wallis, Jamie Foxx, Rose Byrne, Bobby Cannavale and Cameron Diaz.

New York City, 2014. Ten-year-old Annie Bennett (Wallis) has been bounced around a whole bunch of foster homes but is currently living with tantrum-prone, alcoholic and irresponsible Miss Hannigan (Diaz). Cell phone tycoon and mayoral candidate William Stacks (Foxx) pulls her out of the way of a moving car while she attempts to save a stray dog from a couple of bullies, and the footage of this goes viral. Stacks, desperately needing a boost in the polls, tracks down Annie on the advice of his political adviser Guy Danlily (Cannavale), and sends his assistant Grace Farrell (Byrne) to invite her to a lunch for publicity. Annie manages to convince Stacks that he'd get a bigger boost and more publicity opportunities if she moved in with him, and it works. Gradually, Annie grows on Stacks, and the relationship between them grows more genuine. Guy, seeing the polls plateauing with the election closing in, enlists Hannigan to help him hire fake parents for Annie to put Stacks back in the spotlight in time for Election Day.

Unlike its predecessors, Annie doesn't just focus on the rags-to-riches story, but takes the time to dwell on the effect living in poverty to begin with can have on people and the lengths it can drive them to.

Since Annie is an update of a film of a play adapted from a comic strip, all plot points it has in common with its source material are Late Arrival Spoilers, and as such, are unmarked. Plot points new to this version are spoilertagged.