Wealth's in a Name 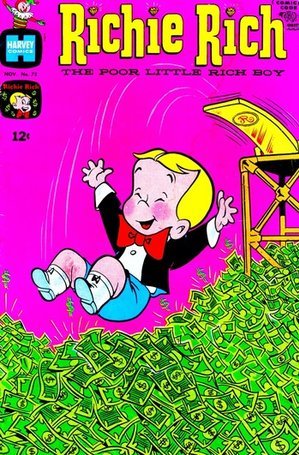 Characters with a lot of money have a tendency to be given names based on how wealthy they are. Obvious examples will contain words like "rich", "money", "cash", "gold,"note This is despite the fact that historically, having variations of "Gold" in one's name may mean one is descended from families with occupations relating to gold, like goldsmithing, instead of being named for merely having lots of money. "bucks", etc., while more subtle examples will have other terms related to money, wealth, business, luxury items, or a lavish lifestyle incorporated in their name. This immediately indicates that the character is loaded and isn't hiding it. This may be an Invoked Trope in families who want to flaunt their wealth (such as the Nouveau Riche who change their names upon obtaining a fortune).

This also applies to poor characters, where words like "poor," "broke," or "penny" in their names reflects their lack of wealth.

A Sub-Trope of Meaningful Name. An example is just as likely to be a Punny Name.

A Sister Trope to Preppy Name (another way to indicate a character's affluence).

See also Uncle Pennybags (who may still have a money pun in his name).