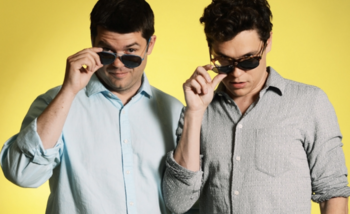 That's Miller on the left and Lord on the right.
Advertisement:

Philip Anderson Lord (born July 12, 1975) and Christopher Robert Miller (born September 23, 1975) are Hollywood's duo of the 21st century. Lord and Miller met at Dartmouth and became inseparable, going on to create the Cult Classic MTV animated series Clone High in 2002. Despite lasting only one season, many of their later works harken back to its sharp humor and creative visual style. They're returning to work on the revived series for HBO Max.

Lord and Miller moved to feature films with the 2009 animated movie Cloudy with a Chance of Meatballs, and later to their first R-rated, live-action feature 21 Jump Street in 2012. They stayed on to direct 22 Jump Street in 2014, as well as The LEGO Movie earlier that same year. They've also produced other projects in film and on television, as well as served as guest writers and directors on TV shows like How I Met Your Mother and The Last Man on Earth.

Afterwards, the two were attached to direct the Star Wars anthology movie Solo before leaving the project a mere few weeks before filming wrapped due to Creative Differences. It didn't stop them from bouncing back though, as they wrote and produced both Spider-Man: Into the Spider-Versenote Lord co-wrote the script with co-director Rodney Rothman, while the duo stayed on as producers and The LEGO Movie 2: The Second Part, released in 2018 and 2019 respectively to universal acclaim. In addition to that, they'll hop back on the director's saddle with two sci-fi films currently in development: Artemis (an adaptation of The Martian author Andy Weir's novel of the same name) and The Last Human (another adaptation of an upcoming book by Lee Bacon). They also signed first-look deals with Sony Pictures Television for overseeing Spider-Man-related TV series

note with the possibility of a television series spin-off of Spider-Man: Into the Spider-Verse and with

Works Lord and Miller have credits on: