Series / The Last Man on Earth 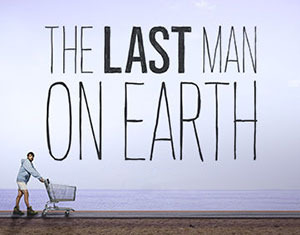 "My name is Phil Miller. I'm alive! Hope you are too!"
Advertisement:

The Last Man on Earth is a FOX Network television series that ran for four seasons between 2015 and 2018. It stars Will Forte, Kristen Schaal, Mel Rodriguez, Cleopatra Coleman, January Jones, and Mary Steenburgen. The series was created by Forte himself, with Phil Lord & Chris Miller producing.

After a mysterious virus wipes out humanity some time around 2019, Phil Miller (Forte) spends two years looking for survivors. Failing to find anyone, he returns home to Tucson, Arizona, and occupies a mansion. The crushing loneliness drives him to despair, and Phil is about to kill himself, when he finally finds another human being, fellow plague survivor Carol Pilbasian (Schaal), who has come to Tucson after seeing the signs Phil left up. In spite of their extreme incompatibility, they forge a relationship of necessity. However, once a second woman (Jones) comes along, Miller falls head over heels for her. Of course, Hilarity Ensues, and things get even more complicated. The show then ultimately becomes an ensemble piece as more survivors join the group.

(After a second character also named Phil Miller joins the group, the original Phil reluctantly goes by his middle name, Tandy. Entries below may use either name for him.)

Not to be confused with the 1964 Vincent Price film of the same title.

The Last Tropes on Earth: