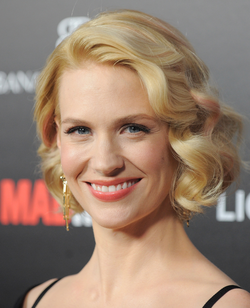 January Kristen Jones (born January 5, 1978 in Sioux Falls, South Dakota) is an American actor and model. Following a bevy of supporting roles in films like Taboo and Love Actually, her breakout role was as troubled 1950s housewife Betty Draper in Mad Men. Since then she's played Emma Frost in X-Men: First Class and Melissa Chartres on The Last Man on Earth, among others.