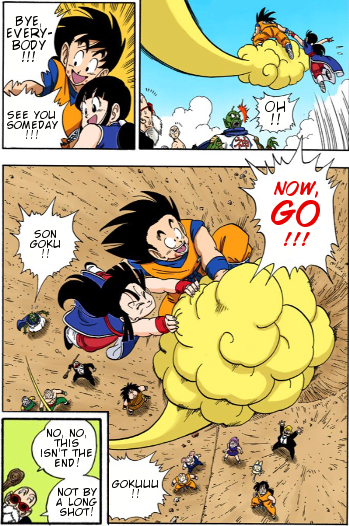 He's just become the strongest man on Earth, defeated the King of Demons (twice), turned down a God Job and gotten married. And it's not even the halfway point...
Advertisement:

A Series Fauxnale is an installment of a work that was originally planned to serve as its conclusion, but ultimately becomes known as just another (if particularly impressive) episode.

Perhaps the creators were uncertain of the future, so they produce something that can quickly tie up the big loose ends in the event they aren't able to continue, but then they were told they could. Perhaps they actually did complete the Myth Arc and this was the Grand Finale they always planned, but the work's immense popularity has the powers that be demand for them to continue onward. Whatever the reason, a series finale of some kind was created, but the series went on after that, making that previous series finale a "fake" one.

It is likely to have all the attributes of Stock Series Finales. The natural result of a Post-Script Season, though some shows last for many, many years thereafter. If the following years of the work are considered lackluster, there'll be more than a couple of fans that claim Fanon Discontinuity on it, and say that this was when it really ended.

Can overlap with Status Quo Is God if the new season, book or film downplays, reverses, or just plain attempts to ignore anything done in the Series Fauxnale that would prevent the characters from engaging in their usual hijinxs.

Given the nature of this article, several spoilers have been left unmarked. Read at your own Risk.

Believe it not, this episode was meant to be the finale for this intended mini-series, hence Shredder and Krang being sent to Dimension X. Due to the show's rapid success, it continued for 9 more seasons.

Believe it not, this episode was meant to be the finale for this intended mini-series, hence Shredder and Krang being sent to Dimension X. Due to the show's rapid success, it continued for 9 more seasons.