Literature / The Patchwork Girl of Oz 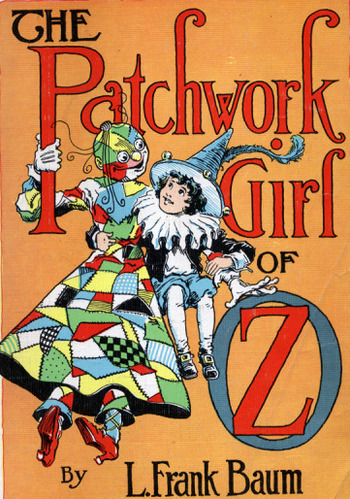 The Patchwork Girl of Oz is the seventh book in L. Frank Baum's Oz book series, which he was obliged to return to after a three year break due to his bankruptcy. It was published on July 1, 1913. Baum dedicated the book to Sumner Hamilton Britton, the young son of his publisher Sumner Charles Britton.

The hero of the tale is a Munchkin boy named "Ojo the Unlucky" who lives with his Unc Nunkie in a remote part of the Munchkin Country. They have nothing to eat but bread, and there are only two loaves growing on their bread tree. They visit their only neighbors, Dr. Pipt and his wife Margolotte. There, they learn of the doctor's magic. Margolotte has used the Powder of Life (as seen in the second Oz book) to animate a glass cat named Bungle, and she plans to use the Powder to provide herself a servant. She makes a dummy out of a crazy quilt, and selects doses of "Obedience," "Amiability," and "Truth" from her jars of "Brain Furniture." Ojo surreptitiously supplements the brain mixture with doses of all the other available possibilities: "Cleverness," "Poesy," "Self-Reliance," etc. When the Patchwork Girl is animated with the Powder of Life, she is more of everything than anybody expected.

When the Patchwork Girl awakens, Unc Nunkie and Margolotte are accidentally dosed with the Liquid of Petrifaction and are paralyzed into marble statues. Ojo, the zany Patchwork Girl, and the Glass Cat set out to gather the five exotic ingredients needed for the antidote, in a journey that takes them across the Land of Oz, and eventually involves the characters familiar to readers of the Oz books, such as Dorothy, the Scarecrow, Ozma and the Shaggy Man.

A silent film adaptation was released in 1914, with Baum's involvement. A direct sequel, the 27th book in the series Ojo In Oz, was written by Ruth Plumly Thompson and features Ojo’s further adventures.