Music / The Next Day 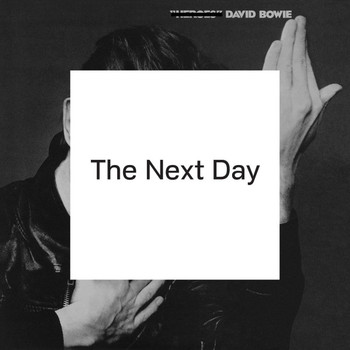 "Here I am, not quite dying."
Advertisement:

The Next Day is the twenty-fifth studio album by David Bowie, released in 2013. His first album since 2003's Reality, the album was sporadically put together in secret over the course of two years, with Bowie requiring everyone involved to sign non-disclosure agreements and even going so far as to change studios when his presence at the first one was disclosed without permission. Even then, an unannounced visit to the second studio by Canadian band Metric nearly blew the lid off the whole thing when Bowie's saxophonist found himself tempted to give away everything that was going on. Despite these hurdles, the album was kept under tight lock and key for the entirety of its production.

Sound-wise, the album continues the Alternative Rock sound of Reality, but mixes it in with Bowie's signature brand of theatrical art rock, thereby offering a more complex take on its 2003 predecessor. Both musically and lyrically, The Next Day also shifts to a much darker direction, influenced by books Bowie read about English and Russian history during his extended break from recording. The lyrics additionally reflect Bowie's awareness of his advanced age (he was already 66 when the album released) and his desire to look back and examine where he'd been and where he was now going. Despite this, the album isn't a voyeuristic look into Bowie's head, instead conveying his thoughts through a series of allegorical vignettes focused on a variety of characters and themes, ranging from a former East German resident's reminiscing on the fall of the Berlin Wall to a school shooter's friend to a defiant Jesus. Tying in with the album's reflective tone, the album cover consists solely of a modified version of that for his landmark 1977 album "Heroes", the title scratched out and a white square with the 2013 album's title plastered over Bowie's face.

The Next Day was a commercial success for Bowie, debuting at the top of the UK Albums chart (his first No. 1 in the country since Black Tie White Noise 20 years prior) and at No. 2 on the Billboard 200, further topping the charts in Argentina, Belgium (on both the Ultratop Flanders and Ultratop Wallonia charts), Croatia, the Czech Republic, Denmark, the Netherlands, Finland, Germany, Ireland, New Zealand, Norway, Poland, Portugal, Scotland, Slovenia, Sweden, and Switzerland. The album would also top Billboard's Top Alternative Albums chart and peak at No. 2 on their Top Rock Albums chart. The Next Day would go on to become the 26th best-selling album of 2013 in the UK and the third-best-selling album of the year in Finland, later being certified platinum in the UK, France, and the Netherlands, and gold in Australia, Austria, Canada, Finland, Germany, Ireland, Italy, New Zealand, Poland, Sweden, and Switzerland.

Five singles were spawned from the album: "Where Are We Now?", "The Stars (Are Out Tonight)", "The Next Day", "Valentine's Day" and "Love Is Lost".

"Here they trope upon the stairs: sexless and unaroused"