Music / Made in Heaven 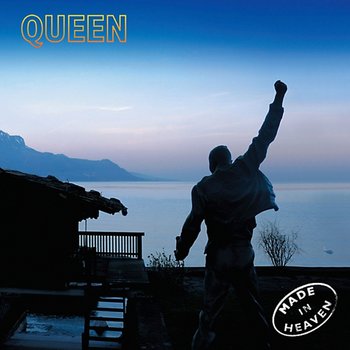 "Made in heaven, made in heaven
It was all meant to be, yeah."
"It's a beautiful day.
The sun is shining, I feel good.
And no one's gonna stop me now, oh yeah."
—"It's a Beautiful Day"
Advertisement:

Made in Heaven is the fifteenth and final album by the British rock band Queen, released through Parlophone Records in the United Kingdom and Hollywood Records in America on 6 November 1995. After recording Innuendo, Freddie Mercury spent the remaining months of his life recording additional vocal and piano tracks before becoming too sickly to finish his final song "Mother Love", leaving the final verse to be sung by Brian May. On 24 November 1991, Freddie Mercury passed away after a lengthy battle with AIDS. The remaining members of the band assembled these recordings between 1993 and 1995 and added the instrumentations in their studio in Montreux, Switzerland, the site of the Freddie Mercury statue as seen on the album cover. "Made in Heaven", from which the album derives its name, was originally a song from Mercury's solo album Mr. Bad Guy, and rerecorded for the album to include the Queen sound.

It was released in two formats: a 48-minute LP, and a CD version with an additional 22-and-a-half-minute untitled ambient track. The covers of both were also different, portraying the Lake Geneva scenery in dawn and dusk respectively. It went quadruple platinum in the United Kingdom, also reaching gold and platinum status in various markets around the world. Two years after the release of the album, the band put out one last single, "No-One but You (Only the Good Die Young)" (recorded for the compilation Queen Rocks), John Deacon retired from music, and Queen became inactive until 2004. To assure that they wouldn't be truly replacing Mercury, they would bill themselves as a collaborative act with a guest singer, first with Bad Company frontman Paul Rodgers as "Queen + Paul Rodgers," then with American Idol runner-up Adam Lambert as "Queen + Adam Lambert."

Made in Heaven was supported by six singles: "Heaven for Everyone", "A Winter's Tale", "I Was Born to Love You" (Japan only), "Too Much Love Will Kill You", "Let Me Live" and "You Don't Fool Me".

Let me live and make a brand new trope: