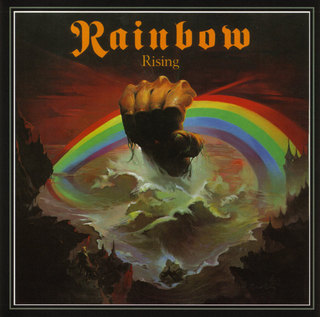 I'm a wheel, I'm a wheel, I can roll I can feel
And you can't stop me turning
'cause I'm the sun, I'm the sun, I can move I can run
But you'll never stop me burning
Come down with fire
Lift my spirit higher
Someone's screaming my name
Come and make me holy again
— "Man on the Silver Mountain"
Advertisement:

Rainbow is, to put it shortly, the lovechild of Everything's Better with Rainbows and The Power of Rock.

Actually, it is the solo project of former Deep Purple guitarist Ritchie Blackmore. It initially started as a quick off-shoot project of Blackmore (backed by Elf, a band fronted by Ronnie James Dio) because he wanted to record a cover of the Quatermass song "Black Sheep of the Family". After Blackmore left Deep Purple, the band became a full-time project.

In the mid-to-late '70s, Rainbow played Hard Rock, influenced by Blackmore's past in Purple and Dio's Heavy Mithril interests. The Dio-era albums are considered an important influence for neoclassical metal and Power Metal. The Blackmore-Dio partnership frayed over creative differences, with the former wanting adopt a more commercial sound, leading to the latter's departure to Black Sabbath.

A replacement vocalist was discovered in Graham Bonnet, who fronted the band's foray into a more AOR-ish style and netted their first hit single "Since You Been Gone" (a Russ Ballard cover). Bonnett left Rainbow to found Alcatrazz, and was replaced by Joe Lynn Turner of Fandango fame for the rest of the band's 80s run. It had a reunion in the 90s, and another one in 2015.

Not to be confused with the K-Pop group of the same name.