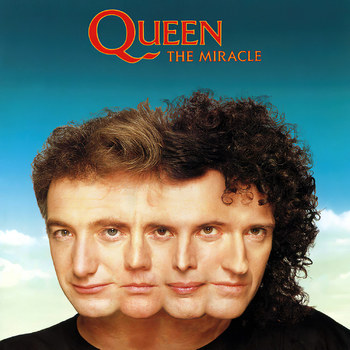 I want it ALL and I want it NOW!.
Advertisement:

The Miracle is the thirteenth studio album by British Glam Rock band Queen, released in 1989. It returns to the Hard Rock sound of the band's early material while simultaneously blending it with the synth-driven style of their later output.

Despite its cheery sound, however, it was recorded during a turbulent period full of personal crisis. Namely, guitarist Brian May was recovering from tensions in his marital life, and more significantly, vocalist Freddie Mercury was diagnosed with AIDS the year after their world tour for A Kind of Magic, with the visible effects of the disease (most notably Mercury's significant weight loss) leading to widespread and unfortunately correct media speculation that he was seriously ill; a good number of outlets even correctly guessed that he had AIDS. Thus, alongside Innuendo and Made in Heaven after it, The Miracle represents a sense of approaching finality for Queen, as the band were forced to confront Freddie's mortality in a time when an AIDS diagnosis was regarded as a death sentence. Indeed, Mercury would die at the end of 1991, months after the release of Innuendo, only confirming his battle the day before his death; before then, he tried to brush off speculation by claiming that he was simply exhausted from over a decade and a half of energetic performing.

As per usual for Queen, The Miracle was a considerable commercial success for the band, topping the charts in the UK, Austria, the Netherlands, Germany, and Switzerland, and peaking at No. 24 on the Billboard 200. The album would go on to become the 14th best-selling album of 1989 in the UK, and would be certified platinum in the UK, Germany, the Netherlands, Poland, Spain, and Switzerland, and gold in Australia, Austria, Finland, France, and New Zealand.

Starting on this album and continuing on the next, all songs are credited to the band Queen as a whole rather than to individual members. The Miracle was supported by five singles: "I Want It All", "Breakthru", "The Invisible Man", "Scandal", and "The Miracle".

Every little trope that's written... it's a miracle!