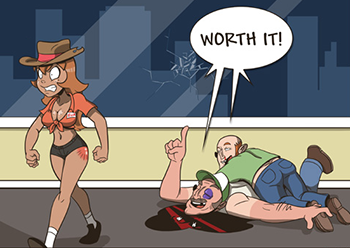 Officer: Well kid, you made an entire town panic, you lost all your friends, and now you're going to Juvenile Hall for a week! Heh, was it worth it?
Cartman: Totally.
— South Park, "Casa Bonita"
Advertisement:

Every action has consequences. Some actions or goals have particularly nasty consequences, or are so exhausting and stressful to achieve... so unpleasant that the character has to ask him or herself, Was It Really Worth It?

For most fictional characters, the answer is yes. Especially if the end result is funny.

This Stock Phrase is usually said after a character does something that they really, really shouldn't have, but the opportunity was too good to pass up. Laser-Guided Karma kicks in and the ogler/vandal/thief ends up incarcerated or suffering Amusing Injuries. But the character cheerfully pays this price: it was Worth It.

This trope can also be Played for Drama if a character has gone through absolute hell but did it to achieve a goal they badly wanted. The stress and exhaustion of doing something for a loved one like a child or a close friend may also be worthwhile if that loved one is happy and grateful for the outcome.

See also Spoof Aesop. If they probably won't be around to say this afterwards, an alternative is I Regret Nothing. Occasionally coincides with I'm Going to Hell for This.

Compare All Men Are Perverts, which says that for a man, the possibility of getting sex is always Worth It, no matter how microscopic that possibility may be, or how difficult, costly, or agonizing "It" is.