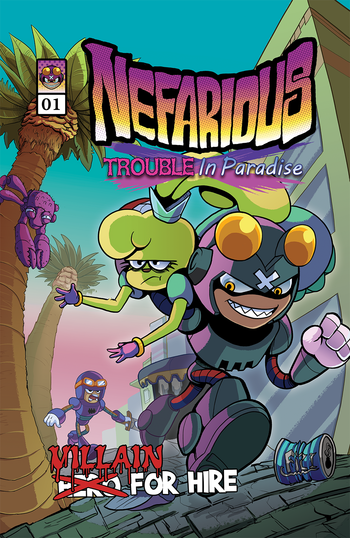 Everyone's favorite villain is back.
A year after its 2017 release, Nefarious introduced a webcomic going more in depth about the game's world. Taking place after where the game ended, it follows Crow's further adventures as a Card-Carrying Villain, with all the stresses of the job that entails. However, due to Crow's empire getting throttled, it instead follows him as a "Villain for Hire": he, like his Rent-a-Hero counterparts, gets jobs helping other villains out or doing some kidnapping when a hero is out of commission. Naturally, this series is rife with spoilers for the game, so consider yourself warned. Josh Hano returns as the story writer and artist, compiling arcs into comic book-like "issues".

The comics can be read here

, though his patrons can get previews of later arcs and other bonus goodies here