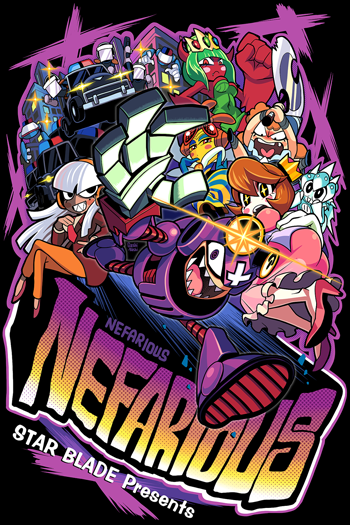 Being bad has never been so good.
"Be the villain! A traditionally animated side-scroller where you get to be the bad guy! Kidnap Princesses! Thwart heroes!"
—- Nefarious' Tagline
Advertisement:

Ever wonder what it would be like to play a traditional 2D Platformer like Mario, but instead of playing as Mario to rescue Princess Peach, you're playing as Bowser, and trying to kidnap her?

takes that concept and runs with it. In this game, you play as Crow, the leader of a villainous group who treats kidnapping princesses like it's a job, and takes his role as a Card-Carrying Villain rather seriously. Crow's ultimate goal is to Take Over the World, and he's not about to let some do-gooder heroes stand in his way. Determined to kidnap every princess he can, no matter how eccentric they may be, will Crow manage to finally cement his role as one of the biggest bads there ever was? Or will he end up an Ineffectual Sympathetic Villain? Only time will tell.

Nefarious was started on Kickstarter, just barely managing to reach its Kickstarter goal by the skin of its teeth in its final hour. Supporting a cast of developers from many different web projects, such as Matthew Taranto from Brawl in the Family fame, the game seeks to humorously explore the princess-kidnapping aspect of games of old.

Supporting a cast of many different princesses for Crow to kidnap, some of which aren't going to sit idly by while Crow kidnaps them, Crow will have to use every bit of his abilities if he wishes to further his goal. Some princesses, like the Energy Being princess Farrah Day, will have rather odd effects on Crow's power suit like supercharging it, while others will force Crow into some rather tricky situations. At the end of the day though, it all comes back to you fighting the princess' normal heroes, but with a twist... You are the end boss battle at most levels, trying to stomp out The Hero with Crow's Humongous Mecha.

The development team has also opened a paypal

for anyone who wishes to further along the project to meet the stretch goals offered during its Kickstarter run. Some of these include a musical stage, additional princesses to kidnap, a New Game+, and co-op modes.

on January 23, 2017. An online comic was released nearly a year later, picking up where the game left off. See here for its tropes. Crow himself also appears as (fittingly enough) the Final Boss in the crossover game Indie Pogo.