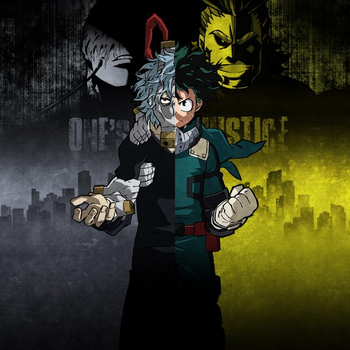 Pictured from far right: All Might, Izuku Midoriya, Tomura Shigaraki, All For One
Your justice begins now!

My Hero One's Justice is a fighting game by Bandai Namco, in development for the PS4, Xbox One, Nintendo Switch, and PC, based on the Shonen Jump manga My Hero Academia. It was released on August 23, 2018 in Japan and October 26 in North America. The game features 3D fighting in destructible arenas, with Assist Character mechanics allowing to call teammates for backup.

The game's story mode covers the second and third seasons of the anime, starting with Midoriya's training under Gran Torino. A bonus What If? scenario can be unlocked, showing the story from the villains' perspective.

A sequel, My Hero One's Justice 2, has been announced and is set to release in 2020. The sequel brings back all of the playable characters from the first game, including those who were DLC, in addition to introducing several new fighters.

Spoilers unmarked for Seasons 2 and 3