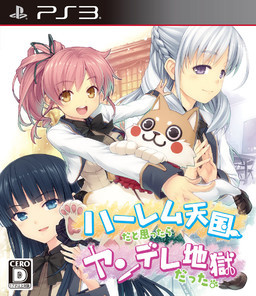 My Harem Heaven is Yandere Hell is a 2014 Japanese visual novel by Nippon Ichi for the PlayStation 3.

Yuuya Kisaragi is a normal high school student. He's a part of the regional history research club — or ReRe Club for short — with three girls who grew up with him: Haruka Arisue, a pink-haired girl and a cheery Tomboy who is good at sports like baseball and bad with schoolwork. Sayuri Miyasu, a gentle white-haired Ojou who excels at all kinds of domestic chores, especially sewing. And Kanna Totomi, a Brainy Brunette who doesn't have an easy time interacting with people and, ironically enough, is the president of their school club.

One day, the student council president tells him that unless his club contributes something of value to the upcoming School Festival, the club will be disbanded. Now he must decide what they should do to save the club. Unfortunately, his choice leads him down a dangerous path. How will this end for him and his club?

Naturally, such a cliché setting and ensemble is just the introduction for an art-style dissonant adventure rife with bloody Bad Endings and multiple flavors of Yandere with their own Weapons of Choice and psychological issues. It's right on the tin for a good reason.

A playlist with English translation can be found here

My Harem Heaven Is Yandere Hell provides examples of: