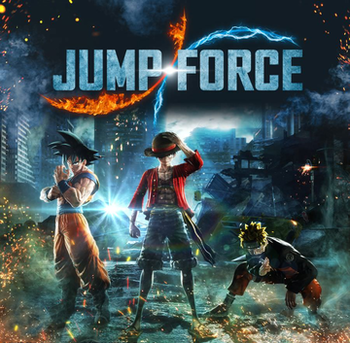 Unite to Fight.
There are worlds that exist, separate from our own. Where the impossible is reality, they coexist to both good and evil. These worlds were never meant to meet, but things have changed. Now... they have begun to merge as one, and our last hope are the heroes we could only imagine, uniting to fight for our survival.
Advertisement:

Jump Force is an action-fighting video game developed by Spike Chunsoft and published by Bandai Namco Entertainment for the Xbox One, PlayStation 4, and PC. It is a crossover of multiple series from Shonen Jump bringing in many heroes and villains from their respective stories to battle each other as their universes collide, with present-day Earth caught in the crossfire. The game released on February 15th, 2019.

In November 2021, Bandai Namco announced that service for Jump Force would be ending. The game and its DLC have been removed from digital storefronts in February 2022, and most online functionality ceased the following August.