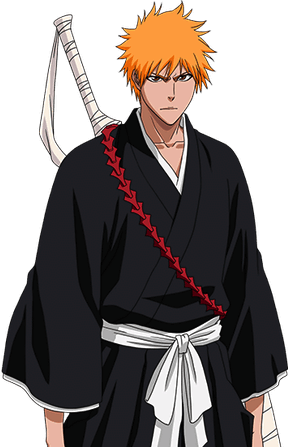 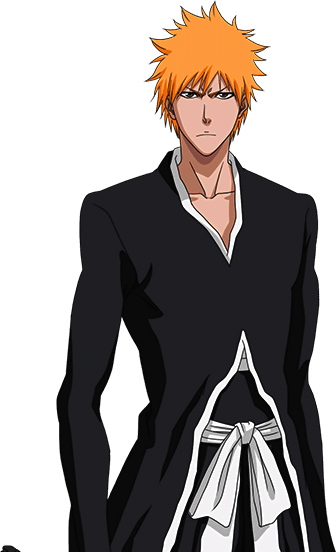 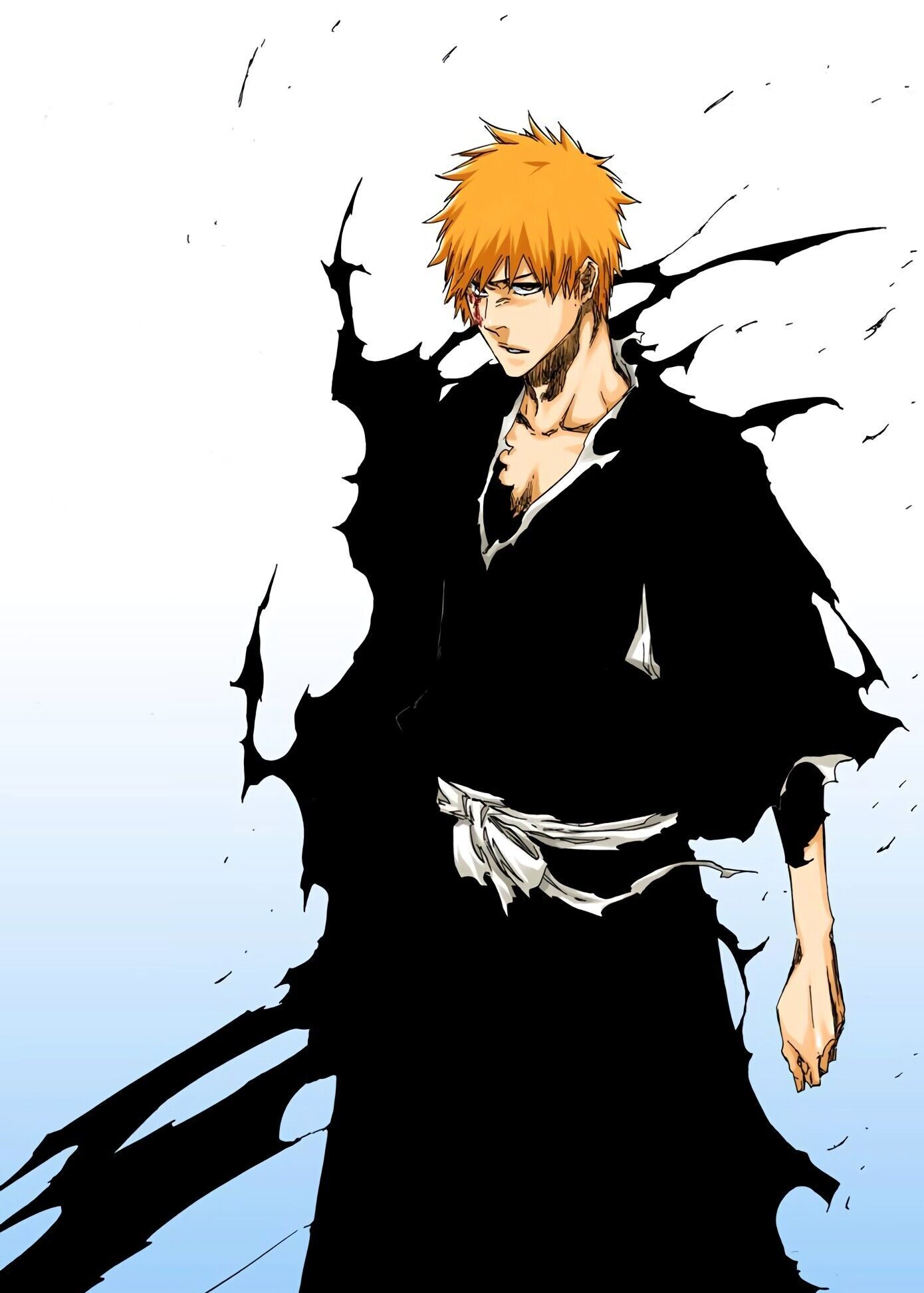 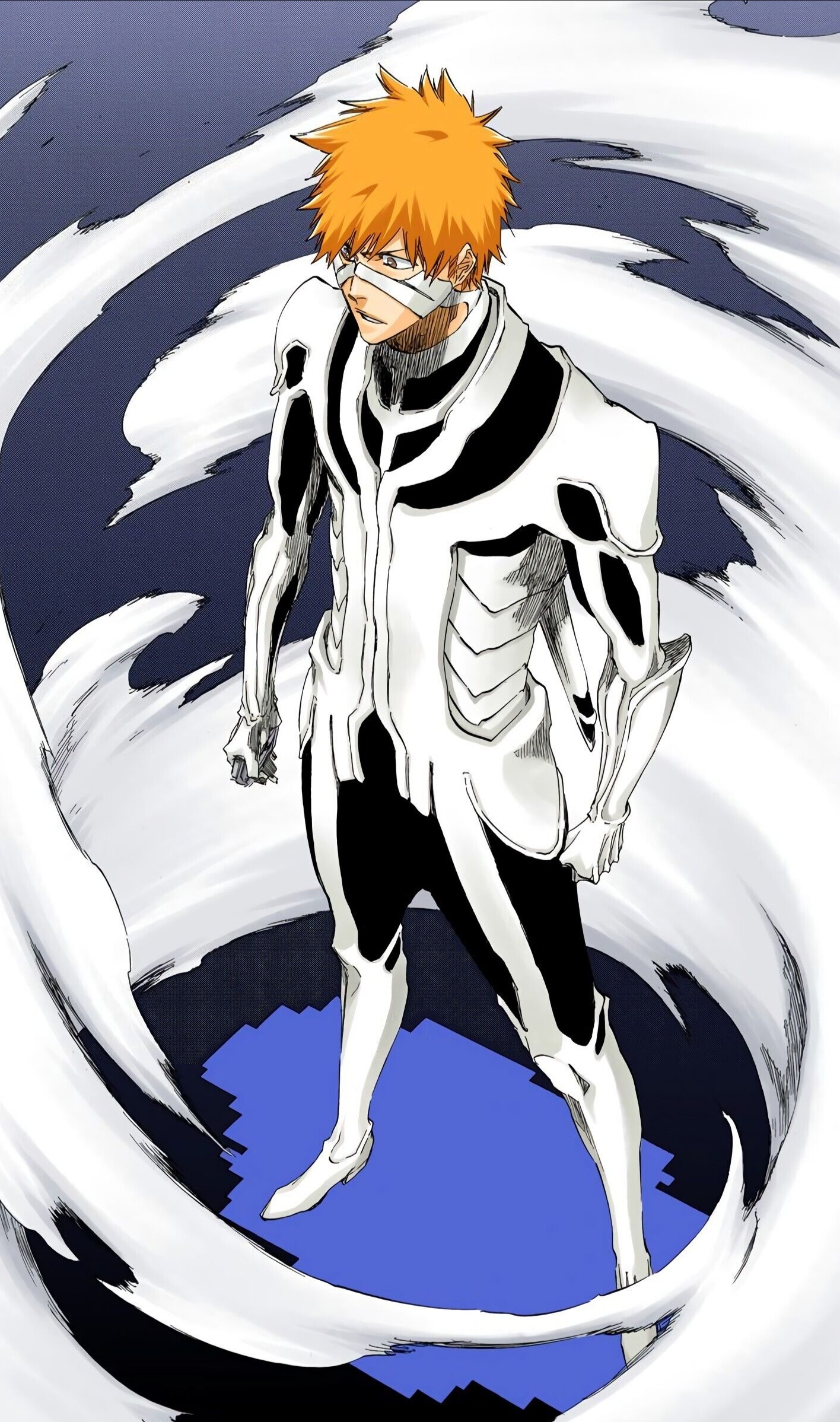 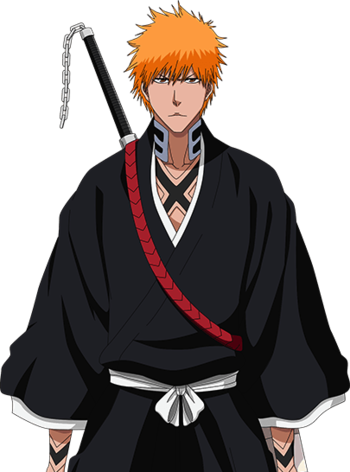 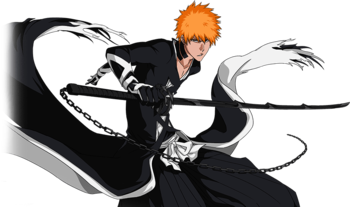 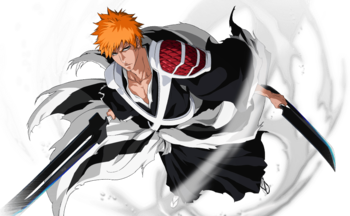 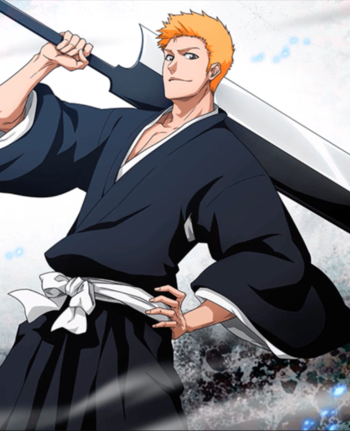 "I'm not Superman. So I can't say anything big like I'll protect everyone on Earth. I'm not a modest guy who will say it's enough if I can protect as many people as my two hands can handle either. I want to protect... a mountain-load of people."
Species: Human-Soul Reaper-Hollow-Quincy hybrid
Zanpakuto: Zangetsu (Shikai) / Tensa Zangetsu (Bankai)
Fullbring: Unnamed
Voiced by: Masakazu Morita (JP), Yuki Matsuoka (as a child) (JP), Johnny Yong Bosch (US), Eduardo Garza (Latin America), Isabel Martiñón (Latin America, young), Armando Guerrero (Latin America/live-action film), Sergio Zamora (Spain), Vincent De Bouard (France), Csongor Szalay (Hungary), Federico Viola (Italy/anime), Ruggero Andreozzi (Italy/animated film), Flavio Aquilone (Italy/live-action film)
Played by: Tatsuya Isaka (Rock Musical Bleach), Sota Fukushi (live-action movie)
Advertisement:
The hero of the series, sarcastic and grumpy, Ichigo originally attempted to cultivate a tough guy image to hide his sense of powerlessness at being unable to protect either people or the spirits he can secretly see. When Rukia gives him Soul Reaper powers, she's shocked by how quickly his abilities eclipse her own and forces him to assume her duties while she's powerless. When Soul Society retrieve the AWOL Rukia, Ichigo learns she will be executed due to it being illegal for Soul Reapers to imbue humans with their power, so he begins an assault on Soul Society to save her.

His growth rate is phenomenal, quickly allowing him to surpass even talented veterans. He has the ability to gain many different kinds of powers, but because they interfere with each other, his competence level fluctuates until he is able to resolve the issue. His Zanpakuto is Zangetsu, which was originally a large blade created by his fusion of Hollow and Soul Reaper powers. It allows him to condense his spirit energy at the tip of the blade and blast it all at once at his enemies - a technique known as Getsuga Tenshou. After obtaining his own Asauchi, it changes to two blades, one of which is large and the other of which is a smaller, arm-length blade. This weapon is destroyed by Yhwach, and subsequently reverts to its original appearance. His Bankai is Tensa Zangetsu, originally a slender pitch-black katana which compresses his vast power within his body, allowing him to perform combat at blinding speeds and with greater strength.

Note: Tropes exclusive to his Inner Hollow can be found here. 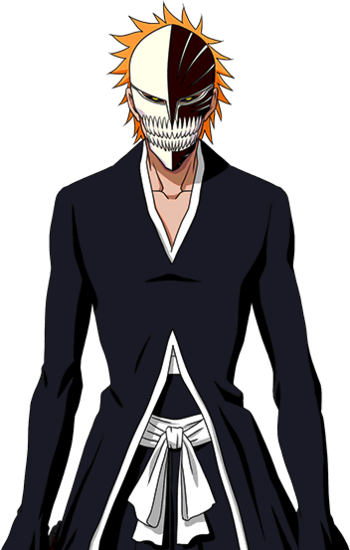 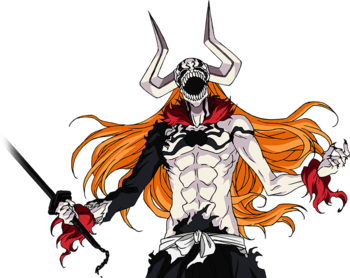 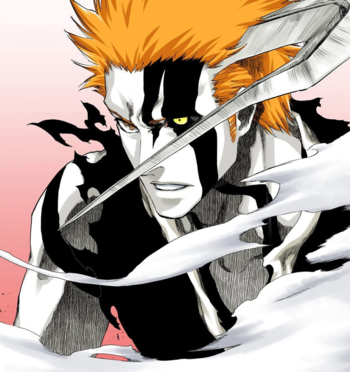 "Help... her... Must... protect... her... Help her... I must... I will... protect her..."
Species: Hollowfied Soul Reaper
Zanpakuto: Zangetsu (Shikai); Tensa Zangetsu (Bankai)
Voiced by: Masakazu Morita (JP), Johnny Yong Bosch (US), Eduardo Garza (Latin America)
The form Ichigo assumes when he loses control of his Hollow powers through being on the brink of defeat, extreme rage, or because his Inner Hollow wants to intervene. It was first seen when Ichigo undertook Kisuke Urahara's Shattered Shaft training and almost completely Hollowfied, awakening his Soul Reaper powers at the last moment. During his fight against Byakuya, Ichigo was nearly killed before his Inner Hollow took over, but suppressed his transformation by ripping off the half-formed mask. Following this, Ichigo's Inner Hollow began regularly attempting to usurp control of his body, disrupting his fights against Yammy and Grimmjow.

When training with the Visored to suppress his Inner Hollow, Ichigo completely Hollowfied for the first time, becoming a humanoid Hollow with a long tail, shoulder spikes, a wild mane of hair, and reptilian feet. He managed to regain control of himself, returning to his Soul Reaper form with the power to use his Hollow mask at will. This form appears twice more in the anime's filler, during the Zanpakuto Rebellion and Reigai Uprising arcs. When Ichigo was mortally wounded by Ulquiorra, he transformed into a completely humanoid and immensely powerful Hollow with long hair and angular, forward-facing horns in order to protect Orihime, easily defeating Ulquiorra but attacking Uryū in the process. Ichigo eventually learned that his Inner Hollow was the result of his Zanpakuto Spirit being assimilated by White, a powerful humanoid Hollow with black armor, bladed arms, and angular forward-facing horns. White was a prototype artificial Arrancar created by Aizen through the amalgamation of Hollowfied Soul Reapers, making him similar to Vasto Lorde Menos, the Visored, and Asauchi-class Zanpakuto. White had fought Isshin Shiba and Masaki Kurosaki years ago in the Human World, and was slain by the latter but managed to infect her with his soul. White's soul tried to take over Masaki but was suppressed by Isshin with help from Urahara, transferring to Ichigo in-utero and becoming his Inner Hollow.

Having come to terms with his Inner Hollow, Ichigo developed the ability to transform into an Arrancar-like Hollowfied form with elements of his second Hollow form. While Ichigo was powerful enough to be capable of fighting evenly with Yhwach, the Quincy Emperor seemingly stripped White's soul from Ichigo due to the Hollow having been passed down from his mother along with his Quincy powers, causing this transformation to dissipate. White's soul was revealed to still be part of Ichigo in Bleach: Can't Fear Your Own World, with Soul Society sending Ichigo back to the World of the Living out of fear that Aizen would be able to somehow control it.