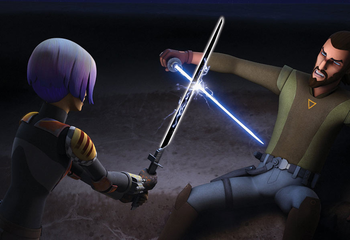 "If possible, find the military [machetes] usually sold at Army surplus stores. Its steel tends to be of a higher quality, and its blackened blade helps concealment at night."
— The Zombie Survival Guide
Advertisement:

A Fantasy trope, but can show up in other genres as well. Want to show that some kind of sword is cool, powerful, deadly, etc? Make this sword black. It can be simply blued,

but sometimes it is made of some fantasy metal which is naturally black. Meteoric iron is often misrepresented as a naturally black metal. (It actually doesn't look all that different from terrestrial iron, once forged and worked.)

This trope often overlaps with Evil Weapon and Artifact of Death, because the color black has connotations for being "dark" as well as "cool." Many examples of black swords are not only superior to boring gray swords, but also more dangerous for the user.

If the sword's owner likes to Dual Wield, their other sword will often be white.