Literature / The Chronicles of Prydain 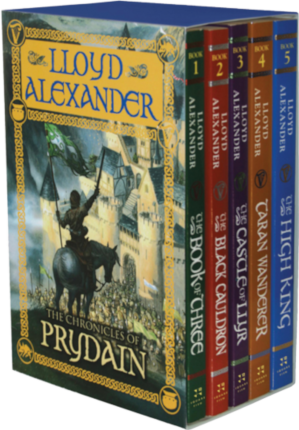 "Every living thing deserves respect, be it humble or proud, ugly or beautiful."
Advertisement:

The Chronicles of Prydain is a five-book series of fantasy novels by the late American author Lloyd Alexander. Based (very) loosely on the Mabinogion and taking place in the fantasy world of Prydain, which bears no small resemblance to Wales. The novels feature a series of epic adventures in a land of High Fantasy, but place more emphasis on the protagonist's growing maturity and his journey into manhood.

Long ago, the land of Prydain was a rich, and prosperous land, renowned for its craftsmen who knew many great secrets about shaping metal and firing clay. Arawn, the local Evil Overlord, would have none of that, and using his cunning and trickery he stole away those wonderous treasures and secrets and locked them away in his fortress, Annuvin, where they would serve no one. The once fair land fell into decay and surely would have fallen under Arawn's power had not the mighty and heroic Sons of Don arrived in Prydain and united its people in an alliance against Arawn's forces. Years have passed and the Sons of Don have maintained peace, but there are those who fear that the people have grown too reliant on their new rulers, the lesser lords constantly feud with each other for foolish and petty reasons, and Arawn is still lurking in the shadows, waiting for the perfect moment to strike.

Enter the protagonist, Taran, Assistant Pig-Keeper to the oracular pig Hen Wen. A boy seemingly in his early teens who was orphaned as an infant, Taran is thrust into the conflicts between the Sons of Don and Arawn as they struggle for the rulership of Prydain. Taran is an ambitious, headstrong youth who initially leaps at any call to adventure and believes himself capable of great things, but in truth he often finds that leading a heroic life of adventure is not all as romantic and exciting as he would have thought. Over the course of the novels, Taran grows from a callow, stubborn youth into a genuinely wise and noble young man, and in the end, learns the hard way what it truly means to be a hero.

Joining Taran on his adventures are his loyal group of lovable companions, whose interactions are one of the most enjoyable parts of the series:

Eilonwy: An enchantress and princess who talks constantly in similes and serves as a romantic interest for Taran. She's also a Tsundere and a bit of an Action Girl. One of the earliest modern examples of a Rebellious Princess.

Fflewddur Fflam: A loud-mouthed bard and king who has a tendency to theatrically exaggerate accounts of his own adventures. He carries a magical harp whose strings break whenever he "colors the facts". (They break often. Even moments of modesty count against him) His catchphrases are "A Fflam is (insert appropriate adjective here)!," and "Great Belin!"

Gurgi: A shaggy apelike creature who speaks in rhyme. At first, he has a tendency to be a Dirty Coward but he grows to become brave and loyal, and comes to admire Taran for his wisdom and call him "Master."

Doli: A member of The Fair Folk, a grumpy dwarf and Jerk with a Heart of Gold. Complains a lot. He has the ability to turn invisible (by holding his breath), but hates to do so as it causes a horrible ringing in his ears.

Gwydion: The Wise Prince and mentor to Taran, a great warrior and war leader whom Taran looks up to and idolizes immensely. He leads the Sons of Don in their battles against the forces of evil, taking the role of a Supporting Leader.

And normally a book-specific Guest-Star Party Member or two, such as Adaon the Warrior Poet and Ellidyr Prince Charmless in The Black Cauldron, Lord Error-Prone Prince Rhun in The Castle of Llyr and Glew in The High King, who takes over the Dirty Coward role from Gurgi.

The series contains five books as well as one anthology which also serves as a prequel:

Disney produced a movie version of The Black Cauldron in 1985, which notably blended elements from the first two books. In 2016 it was revealed Disney plans on taking another whack at the series with a live-action film being put into development.

Also, The Book of Three has a freeware game adaptation

by Lysander86, the developer of A Blurred Line and Phantasy Star III remake; and an ongoing webcomic adaptation

with exceptionally high-quality artwork by Saeriellyn, which is currently (as of July 2017) about halfway through the first book.

This series includes examples of or the sources for: