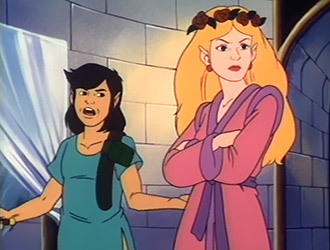 "You called for a hero, princess?"
"Yes! But, I guess you'll have to do."
"Why must everything you say to me sound like a criticism?"
— Robin Hood to Marian, BBC's Robin Hood
Advertisement:

Snarky loser hero meets snarky haughty heroine. They either fall in love, or they snark. Usually both.

This is essentially a satire of the standard Magical Girlfriend, which describes a beautiful, classy, good-mannered, loyal girl — the logical result being she should be somewhat critical of her loser boyfriend. She makes no attempt to ignore the fact that he is the Loser Protagonist, and frequently calls him on it, criticizes him, and rarely if ever fawns over him like some Fangirl. She expects better from him and pushes him to improve, while still expecting to be taken care of. However, the guy usually takes it in stride, mocks her in return, or just says the trope title.

Expect a generous helping of Aw, Look! They Really Do Love Each Other moments, to let the audience know why they should be supporting this couple. The idea is that the snarky loser will help the princess loosen up and be friendlier, while the princess constantly holding the loser to a higher standard will eventually make him improve himself. Often appears in romantic comedies, depending on how satirical the story is.

See also Tsundere and He Is Not My Boyfriend. Related to Belligerent Sexual Tension. Compare/Contrast Screw You, Elves! and Surrounded by Idiots.

If it involves an actual Princess Princess, see Royal Brat. The Woman Wearing the Queenly Mask can make similar demands.

The trope name comes from the The Legend of Zelda cartoon, where Link would quite often retort to Zelda's nagging with those words. note The line, including Link's delivery of it (but excluding "princess"), is heavily inspired by comedian Steve Martin.

That did sound a bit douchey.