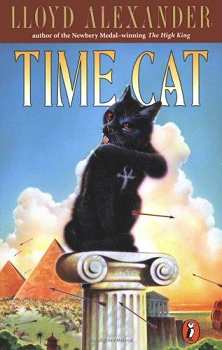 A children's novel written by Lloyd Alexander and published in 1963.

The novel starts off with the protagonist, Jason, a boy who is having a bad day. His black cat, Gareth, enlightens him to the fact that cats have magical qualities that allow them to speak and travel through space and time at will. Together, Jason and Gareth travel through various periods and locations throughout history on a series of adventures involving cats.