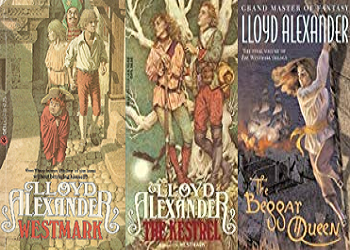 A trilogy by Lloyd Alexander, named after its setting - a fictional nation in a world of roughly 17th-century technology, somewhere vaguely Central European. It centers around the Coming of Age of a printer's apprentice named Theo, and the odd companions he takes up with during a time of political turmoil.
Advertisement:

In the first book, Westmark, King Augustine has fallen into despair after the presumed death of his only child, Augusta. He has turned administration of his kingdom over to Minister Cabbarus while he focuses on spiritualism and other means of trying to commune with his daughter's spirit. Cabbarus has slowly instituted a police state, and suppresses all attempts to print 'sedition' against him. When Theo attempts to resist the soldiers attempting to shut down his press, he kills one of Cabbarus' soldiers and ends up on the run. His new life brings in contact with the swindler 'Count Las Bombas', his assistant Musket, the street urchin Mickle, the pamphleteer-in-hiding Keller, and a group of revolutionaries led by a man named Florian, who dreams of overthrowing Cabbarus and putting a republic in place of the kingship. His adventures inadvertently lead to the discovery that Princess Augusta is still alive, and she is restored to the throne.

In the second book, The Kestrel, Theo has withdrawn from Augusta's new administration, trying to determine his purpose in life. Abruptly, the kingdom to the East launches an invasion to overthrow 'the false Queen' and re-install Cabbarus as their viceroy. The surprise attack forces Queen Augusta from the capital. While she leads her forces in the field, Theo rejoins Florian's revolutionaries and becomes the bloodthirsty partisan known as the Kestrel.

The culmination of the trilogy is The Beggar Queen, in which Queen Augusta and Theo must not only overcome the Regian occupation, but deal with the fact that Florian's revolutionaries, though fighting ferociously against the Regians, have no intention of allowing the monarchy to return to power.