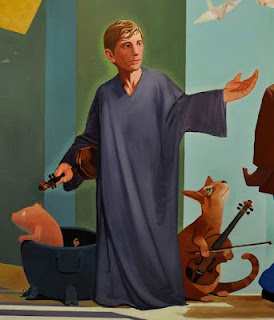 I loved all the world's mythologies.
We learn more by looking for the answer to a question and not finding it than we do from learning the answer itself.
— Lloyd Alexander
Advertisement:

Lloyd Chudley Alexander (January 30, 1924 – May 17, 2007) was an American writer of children's fantasy novels, best known for the High Fantasy The Chronicles of Prydain. Other works include The Arkadians, Time Cat, The Golden Dream of Carlo Chuchio, The Illyrian Adventure and the Westmark trilogy.