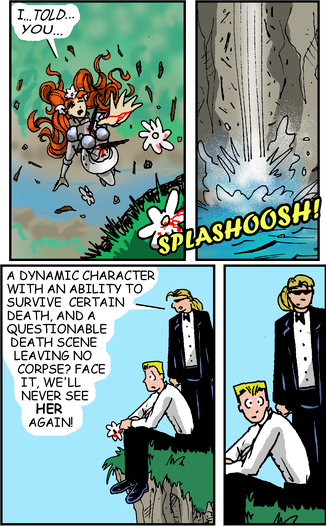 Riff is too Genre Savvy to count out Oasis.
"Never count a Human as dead until you see his body. And even then you can make a mistake."
— Lady Margot Fenring, quoting a Bene Gesserit aphorism, Dune
Advertisement:

A character is killed off, but their death occurs in such a way that no body is recovered.

No matter how all laws of physics and biology indicate No One Could Survive That!, remember, this old rule trumps all: "Never count someone dead unless you have the body in front of you." (And in some cases, not even then.)

The daytime Soap Opera frequently uses this trope combined with Put on a Bus. The actor is leaving the show and the producers want to take advantage of the opportunity for drama. The character is in fact being written out and will be presumed dead indefinitely. However, they leave themselves an out without closing the door in case the actor decides to return.

A common inversion of this trope can be seen in shows where Everything Fades; if there is a body to be found, try not to get too used to his absence. Compare No Body Left Behind.

Subtrope of Uncertain Doom. See also Left for Dead, when the body is seen but left behind without confirming it's dead. May lead to declarations that He's Just Hiding!.

When those left behind proceed to put the disappeared person's house in order, that's declaring the person Legally Dead. If the mortal remains are eventually found, it's Finally Found the Body. If someone wants to hold a Meaningful Funeral despite the lack of a body, it may involve Burying a Substitute. Compare Chekhov M.I.A. and Faking the Dead.

This is a potential Death Trope, so this page will be filled with Unmarked Spoilers.