You may be looking for the original 1954 Japanese version, Godzilla, or the third film in the MonsterVerse series, Godzilla: King of the Monsters. 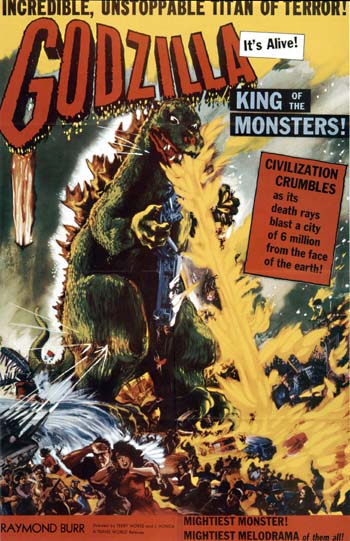 You have your fear, which might become reality, and you have Godzilla, which is reality.
"Godzilla has turned the heart of Tokyo into a sea of fire."
— Steve Martin, as he watches Godzilla destroy Tokyo.
Advertisement:

Godzilla: King of the Monsters! (Kaiju-Oh Gojira in Japan) is the 1956 Americanized version of the original Godzilla (1954). New footage featuring Raymond Burr was shot by Terry Morse, and dubbing was done only for scenes where the Japanese characters appear without Burr's character. While the film downplayed the symbolism of the original, it still retains some of Dr. Yamane's lines about the Hydrogen Bomb being responsible for Godzilla's existence. Despite the fact that it runs at twenty minutes shorter than its Japanese counterpart, Godzilla: King of the Monsters is typically considered one of the more tastefully done Americanizations of a Godzilla film, especially in regards to the fact that this was the first one. If it weren't for this film, then Godzilla would never have become popular in the west, and this page probably wouldn't exist.

Godzilla: King of the Monsters itself is roughly the same story as Gojira, but told from the perspective of American reporter Steve Martin (played by Raymond Burr). Because of this, a full plot description is unnecessary. However, there are some key differences. In the Japanese version, the story opens and plays out much like a film Noir, slowly building up to the destruction of Tokyo, while the American version opens with the aftermath of Godzilla's attack, and the rest of the movie is told as a flashback, except for the scenes which take place after the attack, as those scenes are left relatively intact with the only major changes being that the dialogue was dubbed into English, and Steve Martin interacts with one or two characters.

Most of the sequences cut from the film involve the Japanese version's reporter character, some civilian evacuation scenes before and during Godzilla's first attack, and a portion of the conference held at the Diet after Godzilla's attack on Otojima Island. While Dr. Yamane's statement about Strontium 90 being found in the monster's footprints is left intact, he does not say that Godzilla is the illegitimate child of the H-Bomb as he did in the original, instead saying that Godzilla is an ancient beast that was resurrected due to H-Bomb testing. While this does remove much of the allegorical symbolism found in the original, it still managed to maintain Godzilla's connection to the bomb without being off-putting to American audiences at the time, which was arguably necessary for the film to become so successful in the west.

Interestingly enough, Godzilla: King of the Monsters was so successful that it would later be released in Japan as Kaiju-Oh Gojira or Monster King Godzilla. Raymond Burr's character, Steve Martin, would become an influence on reporter characters in later movies, and the success of this film paved the way for future releases of Godzilla movies in not only the United States, but around the world.

In 1977, Godzilla: King of the Monsters! was recut, colorized, and released in Italy by up-and-coming filmmaker Luigi Cozzi to cash in on the release of King Kong. Often known as "Cozzilla" and "Psychedelic Godzilla" by fans. For that movie's article, see here.

"The menace was gone...so was a great man. But the whole world could wake up and live again!"