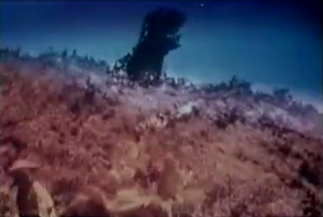 And they said coloring Godzilla wasn't a good idea...
"Godzilla. A savage, catastrophic metaphor for atomic war, rendered in stark, dramatic black and white... or, is it a rainbow-colored acid trip with a bunch of stolen footage from other movies?"
— Ed Glaser
Advertisement:

1954. The Ishiro Honda, Eiji Tsuburaya, and Akira Ifukube-helmed Kaiju film Gojira hit Japanese theaters, acting as a symbol for the Hiroshima bombings and reminding people of the tragedies of World War II.

1977. Wanting to take advantage of the release of King Kong (1976), an Italian filmmaker by the name of Luigi Cozzi decided to release the American Godzilla: King of the Monsters in Italy (he was planning on releasing the original Gojira, but due to rights issues had to settle for King of the Monsters instead).

However, simply dubbing the movie into Italian wasn't enough, for there was one problem: the movie was in black and white. Italian theaters at the time weren't confident that black and white movies would do well with audiences. So Cozzi came up with a solution: colorize the movie.

However, Cozzi didn't stop there. He not only colorized the movie (itself being done by cutting out pieces of translucent gel and laying them over general areas of each frame), but also cut out scenes for pacing reasons, and even (sloppily) inserted stock footage from various other movies (one of them even being Gojira's sequel), as well as wartime newsreels (meaning that some of the devastation in this version of the film actually did happen). These new sequences were accompanied by new electronic music by Fabio Frizzi, who would later compose music for the horror classic Zombi 2note The main theme from Zombi 2 is, in fact, a remix of the Cozzilla theme., and the sound effects in general were remixed and enhanced.

The result? A recut of Gojira that manages to be trippy and psychedelic, as well as a hell of a lot more disturbing than the original version... for all the wrong reasons.

Surprisingly, this Italian version was a success in Italy and is sometimes considered superior to the American version. It's also rather rare, as it was only released in Italy and possibly Turkey as well. You can get an idea of what the recut is like from this video

, and Ed Glaser of Deja View (from whom the page quote comes from) dedicated an episode

Note: Tropes pertaining to the original movie and King of the Monsters belong in their respective articles.

Tropes pertaining to this version of Gojira: