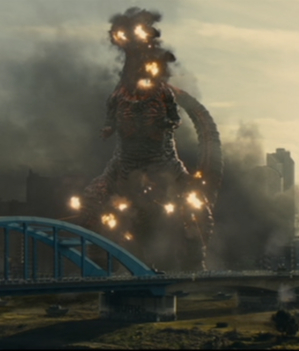 If you think this is going to stop him, you're watching the wrong movie.
Let's face it — things that are bigger than us are scary, and not just because of their size. A large part of the fear invoked by truly gigantic things is that while they could crush you where you stand, puny little you likely couldn't even scratch them. Instinctually, it seems we know that the bigger something becomes, the harder it is to damage. And in fictionland, things can get very, very big.
Advertisement:

After generations of Kaiju movies including Godzilla, Gamera and countless imitators, viewers seem conditioned to accept that any giant monster or robot is completely immune to conventional weaponry. This can be a problem for filmmakers, either making the military in their films look stupid for even being there or destroying the audience's Suspension of Disbelief when Five Rounds Rapid actually works. Not much can be done about this.

It would seem that audiences usually like to see a more creative method for destroying the monster than More Dakka or Stuff Blowing Up.

There are a few methods for overcoming this, including Depleted Phlebotinum Shells and (inexplicably) attaching the very same weapons to another giant robot or monster. On the other hand, simply laying out poisoned bait for these critters and letting their appetites do them in will never, ever, ever occur to anyonenote except in Gamera vs. Gyaos, where this almost worked..

This trope is a staple of the Super Robot Genre and Real Robot Genre, since it justifies the existence of the Humongous Mecha. Since a Robeast can not be defeated through conventional weaponry, it must be fought with another giant enemy.

Contrast the Square-Cube Law, which suggests larger things should actually be weaker. However, assuming that the Square Cube Law is still in effect, and they still don't collapse and die, then this trope is justified because the creature explicitly needs to be super-strong and massively durable simply to withstand their own weight and be able to move with any reasonable efficiency (indeed, beyond a certain size, the body would have to incorporate substances stronger and more durable than anything that exists in real animals). For example, a human-scaled up by merely twice his own height would weigh eight times more. The strength necessary to move his own body weight as fast as normal human would make him incredibly overpowered versus normal-sized opponents. It's also Truth in Television to the extent that a massive difference in size between two animals can render the smaller animal largely incapable of meaningfully harming the larger one (such as an ant biting a human or a human punching an elephant) without injecting venom, attacking a vulnerable area, using a powerful weapon (such as a gun), or otherwise somehow attacking with something other than its own strength (or having a few dozen friends help).