Film / Transformers: Revenge of the Fallen 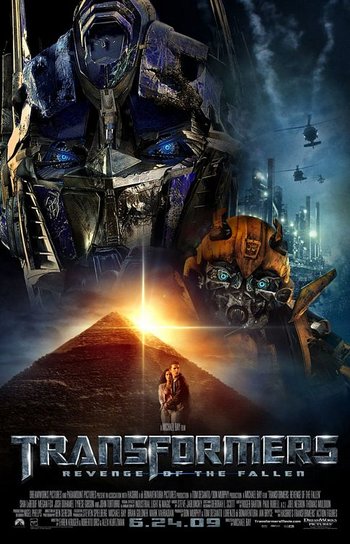 "Fate rarely calls upon us at a moment of our choosing."
"Gotta wonder... if God made us in his image, who made him?"
— Sgt. Epps musing about Optimus Prime
Advertisement:

Two years after the first movie, the Autobots are working alongside Human Special Forces from around the world to deal with random Decepticon arrivals. Sam is heading off to college and has to deal with saying goodbye to Mikaela and encourages Bumblebee to return to the Autobots full time. But when Sam uncovers a fragment of the Allspark, he has secrets of Cybertronian history downloaded into his subconscious mind, including the location of an energon harvester left on Earth by ancient Transformers, the Seven Primes and the founders of their civilization. One of those Primes, known as The Fallen, is the secret mentor to Megatron.

When another Allspark fragment revives Megatron, Sam becomes a target so that they can locate one of the most sacred of Cybertronian artifacts, and key to the Harvester, the Matrix of Leadership.

Transformers: Revenge of the Fallen provides examples of the following tropes:

"Our races united by a history long forgotten and a future we shall face together. I am Optimus Prime, and I send this message so that our pasts can be remembered. For in those memories, we live on."

Simmons and Leo Spitz witness the Constructicons unite to create perhaps the largest Decepticon ever: Devastator.

Simmons and Leo Spitz witness the Constructicons unite to create perhaps the largest Decepticon ever: Devastator.