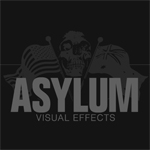 was an American/British based effects studio established in 2000. They disbanded in 2011 due to Chapter 11 Bankruptcy, as explained here

. Their last project, This Means War (2012), was released posthumously.

Not affiliated with The Asylum, or Asylum Models & Effects Ltd.

A more complete filmography can be found here

Tropes for this company: