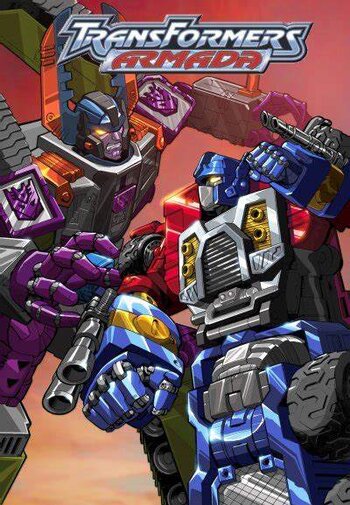 Transformers Armada (known in Japan as Transformers Micron Legend) is one of the many series that make up the Transformers franchise. It takes place in its own continuity, separate from the earlier series. The storyline of Armada continued in Transformers Energon and Transformers Cybertron (however, Cybertron is a separate continuity in the Japanese version). The three series are known as the "Unicron Trilogy".

Unlike Transformers: Robots in Disguise before it (which was only imported to buy time), it was a 'main line' series, and as such had a large toyline.

Transformers Armada mostly revolves around the Mini-Cons: a race of Transformers smaller than usual (about human size or smaller). When linked to one of their larger brethren, they cause a significant boost in power (usually resulting in extra guns appearing). Due to this, the Autobots and Decepticons warred over them until the Mini-Cons ended up leaving to stop the conflict, crash-landing on Earth millions of years in the past and laying dormant until the present day. Most of the episodes revolve around the Autobots trying to gain the support of the Mini-Cons, with the Decepticons after them with the intent to use them to conquer the Autobots, Cybertron, and presumably the universe (as usual).

'), but for the frequent dubbing errors. Due to rushed production, there are several conversations that don't flow properly, or clash with what's happening onscreen. Many characters have their names mixed up with other characters,' such as pretty much everyone being referred to as Leader-1 (Megatron's Mini-Con) at least once. One particularly glaring instance was Optimus saying he'd left Thrust in charge on Cybertron - and the image has "Thrust" kept in shadow because he (actually intended to be Jetfire) hasn't been introduced yet. Of course, Thrust is the name of the Decepticon master tactician, with no sign of ever having been an Autobot - a major point of confusion for viewers. Also, unfinished animation led to some low-quality scenes, and one or two truly nonsense ones (like a black spot of nothing

◊ where Starscream was supposed to be in one battle.) But like most things, it had a few redeeming factors in the overall story and the reintroduction of the meta-villain Unicron. It is generally considered to improve substantially in the second half.

In addition to the series, a mini-manga, called Linkage was released with the Japanese DVDs, written by Hirofumi Ichikawa, which told a separate story about a group of Mini-Cons who encounter a woman named Stella Holley, who helps them free the Mini-Cons from Unicron. The story also features several links to the animated series, and even fills a few plot holes. The series was fan-translated in collaboration with Ichikawa, and can be read online here

A comic from the now defunct Dreamwave Comics was made covering all of the series. It started out mostly mirroring the show's plot with some considerable differences (Mini-Cons could speak normally for starters, while in the show they were limited to bleeps and other electronic noises) but went off in its own direction once Simon Furman took over writing duties. The second half of the series concerns some of the first major mentions of a Transformers multiverse, Unicron invading Earth with his heralds, all Generation 1 Decepticons, and Megatron battling Generation 1 Galvatron one-on-one. The comic was received fairly positively despite (or because of?) these differences.

Megatron tries to tear apart Optimus Prime's hand with one of his tank treads, and Optimus then tears off one of his wheels to plug Galvatron's gun barrel with.

Megatron tries to tear apart Optimus Prime's hand with one of his tank treads, and Optimus then tears off one of his wheels to plug Galvatron's gun barrel with.