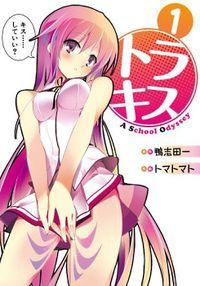 Tora Kiss - A School Odyssey is a seinen manga by Hajime Kamoshida, which ran in Dengeki Daioh from 2012 to 2014.

18 years ago, a powerful monument was discovered on a mysterious island. The monument contained data only certain people could extract – who became students of the island’s school. By being able to extract the data, the students are able to summon a creature that they fight with. Of these people, Satou Taketora is your typical lazy kid who doesn’t do anything, hence he’s ranked dead last. But one day, he’s dragged into a battle with his old childhood friend, but to everyone’s surprise… his summon is more than meets the eye…