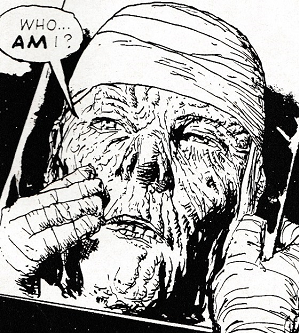 "This story of the loss and regaining of identity is, I think, the framework of all literature."
— Northrop Frye, The Educated Imagination
Advertisement:

An Amnesiac Hero wakes up stranded in the middle of nowhere, with no recollection of who they are. The plot involves, at least in part, their efforts to (re)discover the identity they cannot remember. Amnesiac Dissonance may make this unwise.

The hero may suffer Trauma-Induced Amnesia and their journey to find themselves includes confronting their emotional baggage.

These stories tend to involve: Identity Breakdown, if the search or the identity they've found, becomes too mentally taxing to bear; I Am Who?, if the identity they remember is special or The Chosen One; Amnesiac Costume Identity if they incorrectly assume the clothes they're wearing belong to them or are related to their true identity; Tomato in the Mirror if their identity happens to be a fake of some sort or the bad guy that everyone has been looking for; and The Killer in Me, if they find out they're a killer, which may or may not make them a Villain Protagonist, depending on who they kill.

This is a subtrope of Ontological Mystery. See also Loss of Identity and Identity Amnesia. The Amnesiac Lover may want to do this to remember why they loved whom they've forgotten.