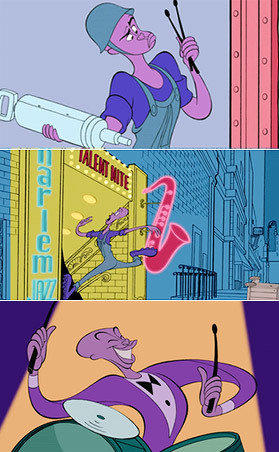 A music career does sound more appealing than construction work. Go figure.
"Can you imagine what it's like cutting the same head for five years? I didn't want to be a barber anyway. I wanted to be a lumberjack. Leaping from tree to tree as they float down the mighty rivers of British Columbia. The giant redwood, the larch, the fir, the mighty scots pine! The smell of fresh-cut timber! The crash of mighty trees! With my best girlie by my side. We'd sing! Sing! Sing!"
— Homicidal Barber, Monty Python's Flying Circus
Advertisement:

Ultimately, they decide to give it all up and pursue their dream job, usually with a creative streak like music, art, writing, or they want to become professional athletes. Sometimes their wish is more mundane, for instance, they might want to open their own business. Alternatively, they want to embrace a simpler life or to follow the irresistible call of the wild. If your character chooses to farm, then it's Call to Agriculture.

Usually, the character needs an impulse to push them towards the path of chasing their dreams. It could be an epiphany after a change in life, e.g. divorce, accident, unemployment. Or an authority figure of sorts – sage, old (maybe dying) relative or a generally unsociable expert in the character's chosen field - needs to impart words of wisdom. Pursuing the dream job is a typical sub-plot in a romance/comedy/romantic comedy, in which case it is usually the new lover who inspires, nudges or shoves our protagonist into discarding their ordinary or sell-out job and moving onto realising their full potential. See Rom Com Job for details.

Characters often make huge strides towards their dream career during a Hard-Work Montage. Compare to Out of Job, Into the Plot. Contrast with Desperately Looking for a Purpose in Life.