Western Animation / The Fox and the Hound 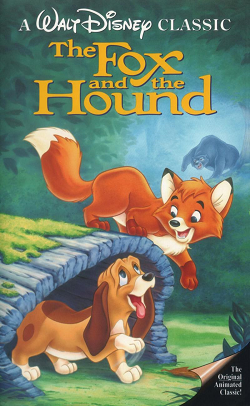 ♪ You're not even aware, you're such a funny pair...♪
Tod: Copper, you're my very best friend.
Copper: And you're mine too, Tod.
Tod: And we'll always be friends forever, won't we?
Copper: Yeah, forever!
Advertisement:

Released in 1981, The Fox and the Hound is the 24th movie in the Disney Animated Canon, very, very, very loosely based on a book of the same name. It is the first Disney animated feature which Walt Disney had no involvement in whatsoever.note While The Aristocats was the last feature he personally greenlit, he was still involved with the early planning stages of Robin Hood (1973), The Rescuers and the three featurettes that would eventually be compiled into The Many Adventures of Winnie the Pooh. This was the first film to be developed after Disney had died (the original book was released in 1967, a year after his passing).

The plot features an old woman finding an infant orphaned fox whom she adopts and names Tod. Meanwhile, her neighbor, a hunter, brings home a hound puppy named Copper intent on raising him to be a hunting dog. Tod and Copper soon meet and quickly become best friends, which raises conflict between their respective owners, but the two promise to remain friends forever. Later, once the two are grown up, Copper is actively participating in his master's hunts, and the friendship between the two is put into jeopardy.

Compare One Stormy Night (which has been interpreted as The Fox and the Hound with sexual tension).

The Fox and the Hound

Copper doesn't have time to be friends with Tod like when they were children, as he's supposed to hunt foxes.

Example of:
We Used to Be Friends

The Fox and the Hound

Copper doesn't have time to be friends with Tod like when they were children, as he's supposed to hunt foxes.