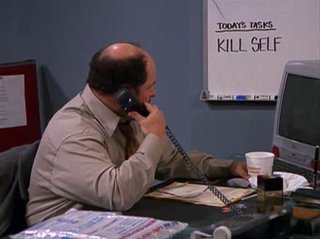 After ten years of dealing with office supplies...
"Right now, this is just a job. If I advance any higher, this would be my career. And well, if this were my career, I'd have to throw myself in front of a train."
— Jim Halpert, The Office (US), "Health Care"
Advertisement:

While white-collar jobs may be coveted in real life, they are not so great in fiction — office work is soul-crushingly boring, or just soul-crushing in general. It has "stressful" and "unfulfilling" written all over it.

The work your character is required to do is often meaningless, repetitive and annoying. In customer service, you have to deal with crappy, disgruntled customers. Your colleagues are either a real pain, making your life even worse, or if you are lucky, they may be your companions in the suffering. Your boss will be too demanding and/or incompetent. Bosses who are too jovial and too friendly are not very popular with the team either. Higher management might be outright tyrannical. You are very likely to be yelled at. Some gentler souls are on the brink of being crushed by the corporate dog-eat-dog world. If your character is lucky enough to be promoted, expect him to deal with incompetent employees who seem to act stupid on purpose. And if they vent about this to friends or family members outside of the company, they'll often receive No Sympathy, because they have what's allegedly a "good" job. (i.e. one that can be done indoors, involves little or no manual labor, and often pays better than "blue-collar" jobs do.) And let's not even get started on the hellstorm of diseases that result from the working conditions.

In fiction, it's often presented as a source of comedy in Work Coms. Alternatively, it can appear for one episode only as a New Job Episode. Or it's a good starting point for a Character Development, when the character decides he can't take it anymore and realizes it's time to quit, ideally to Pursue the Dream Job or possibly just to accept Happiness In Minimum Wage. If the character starts rebelling, it may lead to a glorious "Take This Job and Shove It" situation.

The white-collar equivalent of Soul-Sucking Retail Job, though Soul-Crushing Desk Job has a slightly better reputation in fiction — you have to have at least some skills and a decent education, and the wages might be better, though still nothing to write home about. This is often paired with the drab uniformity of the Standard Office Setting, although the Wacky Startup Workplace might induce this as well.

Truth in Television to some degree, as many psychologists can tell you when speaking about the growing amount of white-collar people suffering from stress, depression or anxiety (or a combination of them) caused by their jobs. This trope's popularity may be influenced by the conflicting skillsets used in white-collar jobs compared to the writing industry, where paperwork and report writing are essentially opposites of creative and fiction writing; and the similarities between the two skillsets may explain why this trope is usually more positively portrayed than Soul-Sucking Retail Job. That is, white-collar workers and writers tend to be more educated and they don't have to routinely deal with customers directly. See also anarchist economist David Graeber's concept of "bullshit jobs

Andy hates his desk job, so much so that he walks out while his boss is berating him for abusing company resources.

Andy hates his desk job, so much so that he walks out while his boss is berating him for abusing company resources.