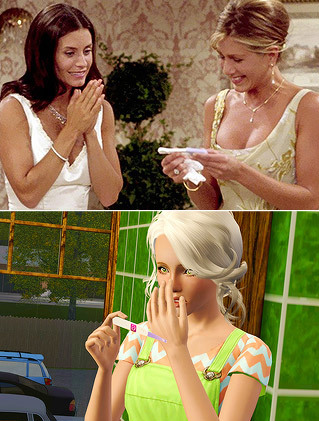 A stick worth a thousand reactions. Positive: Monica and Rachel; Negative: A Sim.
ClearBlue Easy is the most advanced piece of technology you'll ever pee on
— TV commercial

A character takes a pregnancy test, and waits — eagerly or anxiously — for the results. Usually something turning blue or a double line. The test itself looks for hCG, a hormone present in the urine of pregnant people.

When used in a plot, a pregnancy test can be used for:

The precursor for this trope would probably be called "The Rabbit Died", which is itself a biology-fail about how the old method of pregnancy-testing worked.

It can overlap with Law of Inverse Fertility and it may lead into a Pregnancy Scare. Sometimes constitutes Artistic License – Biology, if the writer doesn't actually have a clue how pregnancy tests work.