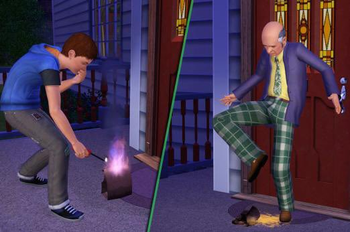 The date we shared was worse than bad
It was the worst I've ever had
An angry slap's too good for you
So have this flaming bag of poo
— The Sims 2, when the "Worst Date Ever" is triggered
Advertisement:

The "burning bag of poop" is a very old and rather gross Practical Joke in which someone puts a bag filled with feces of some variety on someone's porch or stoop, lights it on fire, rings the doorbell or knocks, and then either runs away or hides to watch. Upon answering the door, the unsuspecting target panics and stomps out the burning bag, only to realize that their shoes are now fouled.

Related to Ding-Dong-Ditch Distraction, although the end result is very different.