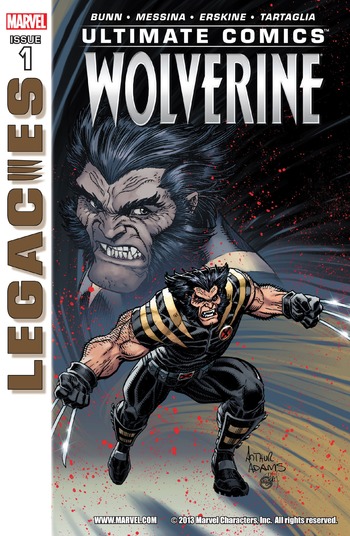 Ultimate Comics: Wolverine was a comic book by Cullen Bunn and David Messina, set in the Ultimate Marvel universe. Although he's in the title, Wolverine is a Posthumous Character in this story, as he had died in Ultimatum (and stayed dead), and only appears in flashbacks. The story has ties to the then current arc of Ultimate X-Men.

Jimmy Hudson has a video will of Wolverine, and plays it several times. Black Box (a technopath mutant) hears it and realizes that the will has concealed information, about "Project: Mothervine". They both leave the reservation and try to get info about it. It was a project of many years ago, that turned the fetuses of selected pregnant women to turn the babies into sleeper agent mutants, who could be awaken with a trigger phrase. It was stopped back then by Wolverine, working for the government, and Magda, working for other people but with a similar goal. They had sex after the reunion, and Magda later applied the Mothervine on herself. Only the part of it that turned her baby into a mutant, and not the rest.

Jimmy is not the only one searching for the Mothervine. Quicksilver also does, trying to restore mutantkind. And also to try to recruit his newfound brother.

Note that this page is about the miniseries. For tropes about the character, see here.