Only the Worthy May Pass 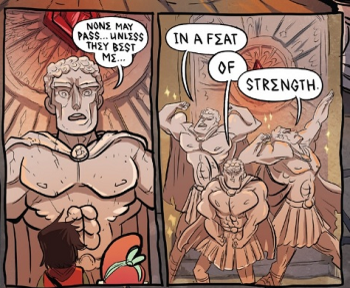 AWAKEN MY MASTERS!
"Know this. Only one may enter here. One whose worth lies far within. A diamond in the rough."
— The Cave of Wonders, Aladdin
Advertisement:

There is a barrier that blocks the progress of the protagonists unless they are worthy.

Exactly what "worthy" means depends on the work. In a video game, it might mean your character must be at or above a certain level, that the Karma Meter is positive (or that the dark magic hasn't been used more than X times), or simply that you've run across the right event trigger. In an idealistic show, the pure of heart or the innocent will be worthy, and the Card-Carrying Villain will be blocked. In a cynical work, the pure in heart and the innocent will be blocked; the pragmatic will be worthy.

It may happen that there are people on the far side of the barrier who shouldn't be worthy. This trope hinges on the Rule of Perception more than it ought to.

Compare Because Destiny Says So, Only Idiots May Pass, Secret Test of Character.