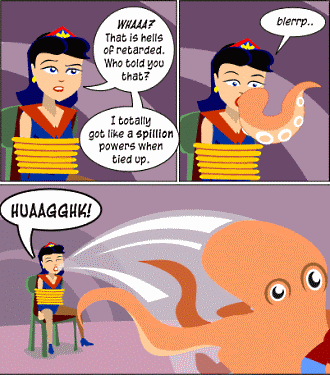 Using this trope as a weapon.
Advertisement:

A variation of Body Horror, where a creature is inside someone else, and then leaves through an established opening of the body (as in naturally, not a cut or piercing), even if it's not really an opening (like the navel). It could be the mouth, the nostrils, the ear, or through orifices below the belt. Pores could even count. The point is that the orifice is pretty much intact when the creature leaves.

Sometimes this can be horrific, but sometimes not. It depends on the nature of the evacuation. As the picture shows, it can even be Played for Laughs.

Compare Chest Burster (when the creature makes its own orifice to leave, or mutilates an orifice to get out), Giving Up the Ghost.