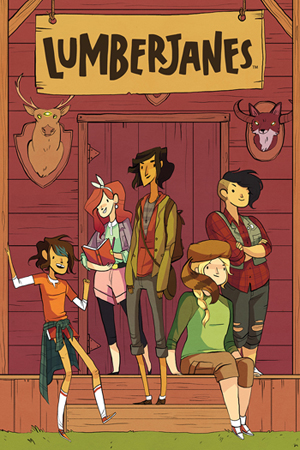 From left to right: Ripley, April, Jo, Molly, and Mal.
"WE CAN EXPLAIN! There was this bearwoman."
And we followed her because duh: bearwoman.
And then there were these foxes but they were magic foxes?
And we beat the stuffing outta those guys!
Even though that wasn't the plan."
— The Lumberjanes
Advertisement:

Lumberjanes from Boom! Studios is about a summer camp cabin of girls who sneak out at night and stumble into paranormal adventures. It's Buffy the Vampire Slayer meets Gravity Falls featuring five butt-kicking, rad teenage girls whaling on monsters, solving mysteries, and making friends in the Enchanted Forest outside of the camp. Jo, April, Mal, Molly and Ripley are five best pals determined to have an awesome summer together... and they're not gonna let any insane quest or an array of supernatural critters get in their way!

Originally conceived as an 8-issue limited series, 75 issues, a one-shot Grand Finale, 4 annual one-shot specials, and 3 original graphic novels were ultimately published between 2014 and 2020. The original creative team consisted of ND Stevenson, Brooklyn Allen, Boom! editor Shannon Waters, and Grace Ellis note this was originally billed as an all-woman creative team, but Allen came out as a trans man during the series run, and Stevenson later as transmasculine; later creators have been women. There was considerable turnover throughout the book's run (which included Stevenson leaving after issue 17 to pursue a career in animation). In 2016, the series crossed over with Gotham Academy for a six issue miniseries. Four middle grade prose novels were published from 2017–2019, written by Mariko Tamaki.

An animated adaptation is in development

on HBO Max, to be showrun by Stevenson. Its status is currently unknown following the cancellation of several animated projects and removal of multiple animated shows from the platform in the wake of Warner Bros’ merger with Discovery.

See also the Spear Counterpart of this series, The Backstagers.