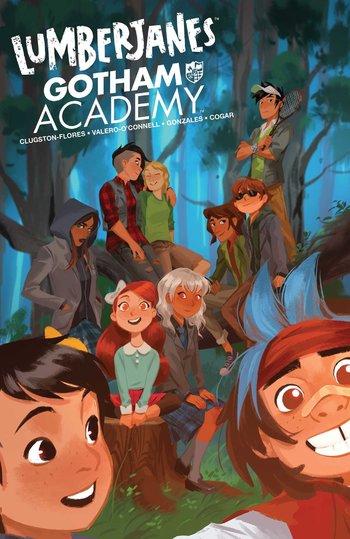 Lumberjanes/Gotham Academy is a six-issue miniseries published in 2016, a co-production between Boom! Studios and DC Comics, and (if you couldn't guess by the title) a crossover between Lumberjanes and Gotham Academy.

Rosie is investigating a seemingly abandoned lodge near the camp when she gets confronted by a mysterious creature. She manages to shoot off a flare before it takes her away, alerting the Lumberjanes and prompting them to search for her.

Meanwhile, at Gotham Academy, Olive and Maps discover that Professor MacPherson has mysteriously disappeared when the former tries to get a term paper to her. Through some investigating, they discover an old invite to a party held at a lodge — the same one Rosie was investigating. With this evidence, they and the rest of the Detective Club steal the Professor's car and drive off to check out the lodge.

Naturally, the two groups end up meeting and team up to solve the mystery.