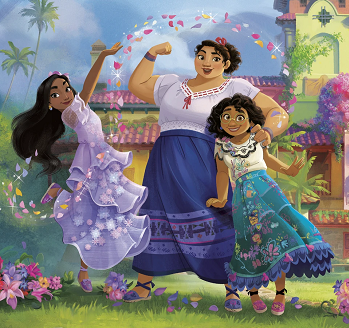 ♫ My older sisters: Isabela and Luisa.
One strong, one graceful, perfect in every way! ♫
Town Girls is a trio of female characters, consisting of one who is butch, one who is femme and one who is neither. Butch and femme are lesbian identities for gender expression; in this case, it is referring to masculinity displayed by a female beyond what would be considered typical of a tomboy and femininity beyond what would be considered typical of the Girly Girl. The femme one is like a fashionable uptown girl. The butch one is like someone whose rude behavior could be excused by saying that she is from out of town — maybe a Country Mouse. The one who is neither butch nor femme is like a Street Smart girl from downtown. Thus the Town Girls are from uptown, downtown and out of town. Bonus points if the geography is literal.
Advertisement:

The one who is neither butch nor femme is usually the smart, friendly and well-intentioned Girl Next Door. She can also be more free-spirited, either with her mind or her body. The butch character is likely a tough chick but might be more of a Femme Fatale or be sexually aggressive. The Femme one is either high-maintenance, romantically assertive or neither.

Compare Masculine, Feminine, Androgyne Trio, a configuration of characters of any gender where one member is masculine, one member is feminine, and one member is androgynous or of Ambiguous Gender. See Four-Girl Ensemble.