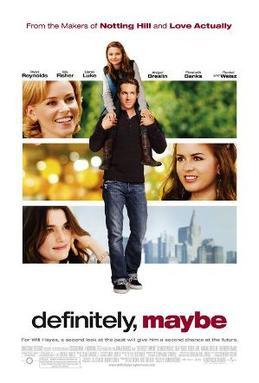 Reynolds plays Will Hayes, a divorced 38 year old father. His 10 year old daughter Maya (Abigail Breslin), lives with her mother but visits him twice a week. On one of these visits, after her first sex education class at school, Maya asks him to recount the story of how he and her mother met, and though initially reluctant to do so, he eventually relents and agrees to tell her the story, on the condition that he be allowed to change the names and some of the facts.

It all begins in 1992 when Will, having just graduated college as an idealistic young aspiring politician, moves from Wisconsin to New York City to work for Bill Clinton's presidential campaign along with his best friend Russell (Derek Luke). The initial plan is for Emily (Banks), his college girlfriend, to join him after a few months, at which time he intends to propose, but things don't go according to plan and Will ends up going through multiple relationships and years of romantic highs and lows before settling down with the woman he eventually marries. In addition to Emily, the women who come into his life are April (Fisher), a co-worker from the campaign, and Summer (Weisz), Emily's former roommate and a magazine writer who is in a relationship with her much older thesis tutor (Kline) when Will meets her; it is left to Maya (and the audience) to try to determine which of the three Will ended up with, and thus which of the three is Maya's mother.