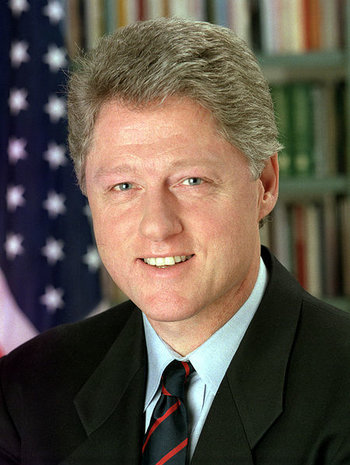 "You can put wings on a pig, but that doesn't make it an eagle."
"Posterity is the world to come; the world for whom we hold our ideals, from whom we have borrowed our planet, and to whom we bear sacred responsibility. We must do what America does best: offer more opportunity to all and demand responsibility from all."
— From his first inaugural address, January 20, 1993
Advertisement:

America's first Democratic president at the time since Jimmy Carter, and the 15th to serve as a member of that party, he was also the first Democrat to serve two terms, having been elected to both, since Franklin D. Roosevelt.note Roosevelt in fact won four elections and died early in his fourth term; Harry S. Truman finished FDR's fourth term, was then elected in his own right for a term in 1948, and did not run for a second full term; John F. Kennedy was assassinated before he could finish his first term, which Lyndon Johnson finished before being elected in his own right for a term in 1964, and he did not run for a second full term; and Jimmy Carter only served one full term, winning the 1976 election and losing that of 1980. Plus, he was the first president to be born after World War II, and therefore the first Baby Boomer President;note In fact, he was the first of three presidents born in the summer of 1946, with the younger Bush and Donald Trump following him. only Theodore Roosevelt and John F. Kennedy were younger when they first took office. Also, he was the first president to have been educated at a Catholic university (Georgetown).note Kennedy was the only Catholic president before Clinton, but he began his college studies at Princeton, was forced to drop out due to illness, and eventually completed his undergraduate studies at Harvard. Joe Biden, the second Catholic president, did his undergraduate studies at the University of Delaware and got his law degree at Syracuse University. The Clinton presidency is best known for a prosperous economy and for his impeachment by a Republican-controlled Congress. Less known are his efforts to put an end to The Troubles in Northern Ireland in 1995 (though things dragged on for a few years, it was ultimately his intervention that helped to end it).

Contrary to the image of the presidency as an upper-class platform, Clinton came from a background of fierce lower-class struggle. This ended up working to his advantage, as rather than being portrayed as a backwater hick or a repeat of former farmer Carter, it allowed him to craft a populist image that could directly contrast the "dorky old dad" image the elder Bush had developed and appeal more easily across class lines; a campaign speech in which a teary-eyed Clinton stated that "I feel your pain" became emblematic of his image as a president for the people. During his time in office, African-American writer Toni Morrison dubbed him "the first black president" as a result of how effectively Clinton's invocations of his background appealed to and resonated with redlined black voters in particular, with black scholars generally agreeing with the label and its connotations in analyzing Clinton's popularity among black communities. This also led to heightened expectations for the actual first black president, Barack Obama, who had a more upper-class and Bohemian image more in-step with the conventional image of the presidency prior to Clinton (though Obama, like Clinton, successfully maintained heavy popularity among black Americans, aided in part by him constantly staying in touch with trends and issues relevant to ordinary black Americans rather than falling victim to the classist apathy of black capitalism).

Since leaving office, he has become an acclaimed public speaker and charity organizer. Clinton has had an active post-presidency conducting humanitarian work through the Clinton Foundation and campaigning for Democratic candidates up and down the ticket. Up until 2016 he was widely known to be The Man Behind the Man running the Democratic Party and his campaign work, including a rousing keynote speech at the Democratic National Convention, was widely credited for helping Barack Obama get re-elected in 2012.

Clinton had perhaps the widest range of satirical portrayals of any president. At the beginning his comedic persona was that of a hickish southerner; a "Bubba" who enjoyed too much fast food and was out of his league in Washington. As his presidency went on, parodies increasingly played upon a "Slick Willie" portrayal, a fast-talker in both the situation room and the bedroom, able to invoke Refuge in Audacity to barrel through scandals with his popularity rating remaining high. He is currently largely known in media parody and satire for his playing of the saxophone and perpetually groping his interns thanks to all those sex scandals. Given the masterful use of Weasel Words during the Lewinsky scandal (including the legendary "it depends on what the meaning of the word 'is' is"), he also has a reputation of being able to talk his way out of anything.

Despite his sex scandal, he was actually one of the most popular presidents among women, due to a number of policies that were generally acclaimed as feminist. Also, due to her own involvement in politics, Hillary Rodham Clinton has perhaps been the target of more satire than any other First Lady: most of these satires played up her own calculating nature and the notion of a "Faustian Deal" with her husband wherein she would stay with him, no matter how many affairs he might have, in exchange for helping her achieve political power in her own right. When Hillary ran for the Democratic Party's presidential nomination in 2008 and became the nominee in 2016, speculation arose in the media as to what title Bill would hold (First Gentleman, First Dude, First Laddie, among others) if she actually became the next Commander in Chief.

That said, Clinton's power and popularity has dramatically declined over the past few years. Hillary's loss to Donald Trump in the 2016 election severely damaged his reputation as a political operator and saw him lose much of the power he used to wield within the Democratic Party (ironically, the 2017 book Shattered claims that Bill correctly diagnosed the problems that doomed Hillary's campaign early on but his warnings were ignored and concerns dismissed by campaign manager Robby Mook). As the Democratic base became younger and more populist, more serious scrutiny was applied to his behavior and his record. Millennials fault his economic policies for helping cause the economic difficulties their generation faces, with longshot challenger Bernie Sanders — a self-identifying democratic socialist in a country where "socialist" has been an epithet for decades — attracting a surprising amount of youth support for that reason. The mainstream Democratic base more broadly is soured by how Hillary's decade-long attempt to elevate herself to the White House ended with the far-right rising to power and their party being reduced to minority status at the federal level and in a majority of state governments, forcing them to rebuild and reunite under elderly leaders like Joe Biden, Nancy Pelosi and Chuck Schumer.

Moreover, the several allegations of sexual misconduct that were leveled against him during his presidency received far more scrutiny from both the press and his own party in the wake of #MeToo, not only due to the acts involved in the accusations (alongside connections with infamous child trafficker Jeffrey Epstein), but also the huge imbalance of power between the president of the United States and the interns who accused him. This led to him not making a single appearance during the 2018 midterm elections, as many Democrats conceded that he's become too controversial to be used in public campaigns anymore. Similarly, he kept a low profile during the 2020 presidential campaign and his diminishment was crystallized by the 2020 Democratic National Convention, where he only spoke for five minutes alongside Jimmy Carter before fading into the background, a dramatic change from the hour-long top-billed speeches Clinton gave at conventions during the 2000s and 2010s.note While all of the 2020 DNC speeches were much shorter than pervious ones, Clinton's was especially terse compared to Obama's 19 minute speech and was even shorter than the ones given by Biden's primary rivals Elizabeth Warren and Bernie Sanders. Though to be fair, it may also be due to the fact that it has been over 20 years since he was President, whereas most young voters know him mainly as Hillary Clinton's husband, and that Barack Obama and Joe Biden are the more recent Democratic presidents.